Darwin Nunez’s suspension following his red card for Liverpool against Crystal Palace may have spared Lisandro Martinez another examination of his aerial ability on Monday Night Football but the two Premier League newcomers share something if not a pitch. 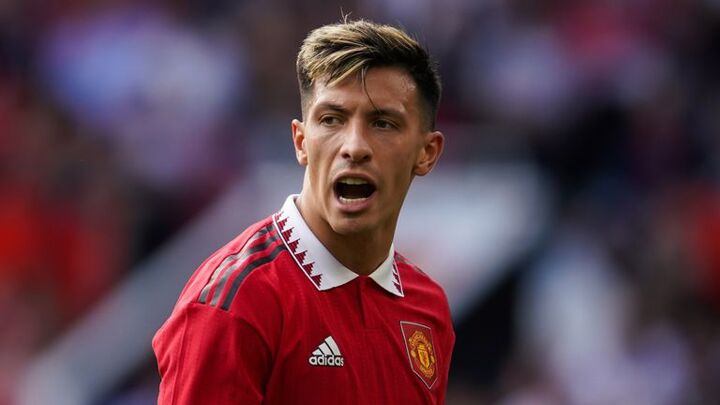 The struggles of both have been held up as proof of Premier League exceptionalism, the idea that the peculiarities of the English game are so distinct that experiences elsewhere are rendered redundant. Nunez had never been roughed up like this.

A clip of him appearing increasingly flustered due to the close attention of Joachim Andersen has garnered almost five million views on Twitter. The Uruguayan was never sent off for Benfica despite having to deal with the veteran Pepe of all people. This, they say, shows that the Premier League is different.

Similar things are being said of Martinez.

The sight of Ben Mee beating him to the ball for Brentford's third goal confirmed suspicions. Franco Baresi might be a legend and Fabio Cannavaro has that Ballon d'Or win but they didn't do it in England did they? This is no country for small men. How could Martinez possibly cope in a Premier League that will pit him against power forwards such as Nunez or Erling Haaland?

Except that he already has faced Nunez - twice in the quarter-final of last season's Champions League. He was part of the Ajax defence that shut out Haaland in a 4-0 win in the previous round. He has been around a while. They can jump on the continent too.

Martinez, or the 5'9" Lisandro Martinez to give him his full name, had an aerial success rate of 71 per cent in Eredivisie last season, not just impressive but the best of any player in that competition. It is not a statistic to end the debate but is worthy of mention. His combative approach to the game has long been seen as an asset. 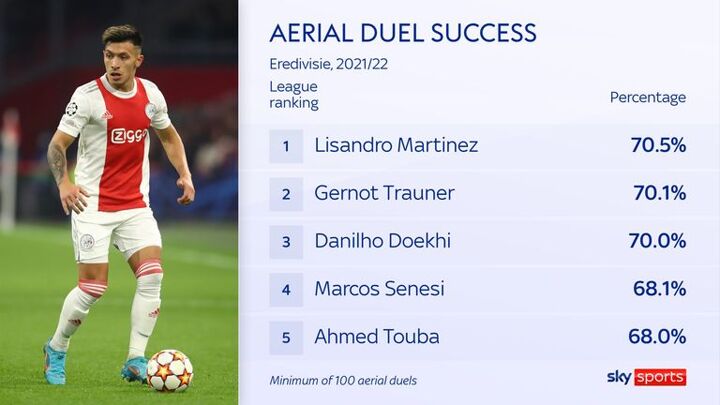 The view among those close to Martinez is that he should remain calm. His camp are telling him that this level of scrutiny is normal at Manchester United and the furore is to be expected given the team's results. Harry Maguire, United's captain, is experiencing it too.

But there is also frustration that the debate is being framed around Martinez's height. After almost 200 senior appearances and having claimed the Rinus Michels award in May as Ajax's player of the season, this is an argument that the player thought he had won.

"In my opinion, it does not have anything to do with height," says a source who worked closely with the Ajax defence last season and this. "If you are smart enough, you do not need height. It is about individual tactics whether you win a duel or not." 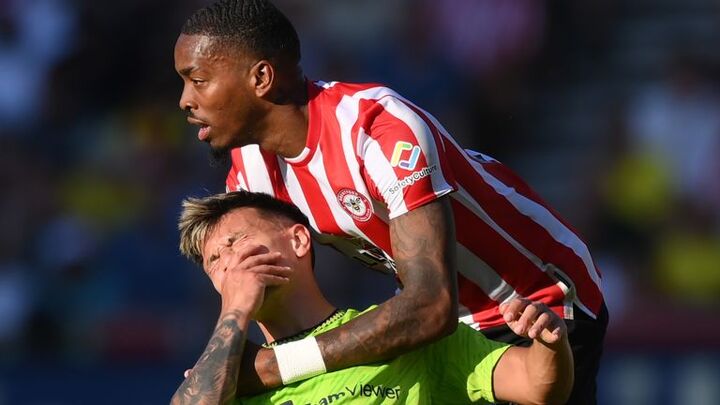 Watch back his first two appearances for Manchester United and what is striking is that there are surprisingly few examples of him being beaten in the air. In fact, according to Opta, Martinez is yet to even register an aerial duel in the Premier League.

Opta defines such a duel as occurring when two players contest the ball in the air. The only other defenders to have started a Premier League game this season but not been involved in one are Marc Cucurella and Neco Williams. Neither are centre-backs in a back four.

There are two ways of interpreting this statistic. Is Martinez shirking the responsibility of his role? Or is he trying to find a way to deal with these situations in a slightly different way? Consider the evidence of that miserable 45 minutes against Brentford…

And that was it. Martinez was removed at half-time. Despite Ten Hag's insistence that the decision had little to do with adding height to the team and claiming that he could have changed every player on the pitch, it added to the scrutiny on his £57m signing.

But this was no roughing up in which Martinez wilted. It was arguably less dramatic than the Ivan Toney induced ordeal that Ben White endured on his Arsenal debut last season - a night from which the 5'11" England defender was able to recover from in style.

Martinez should have been quicker to move his feet into position to prevent Mee jumping unhindered for his goal. But even up against the most direct team still in the Premier League and one of its most robust strikers, the evidence against Martinez was minimal.

The Premier League is changing. The number of aerial duels that a defence has to deal with is decreasing. In fact, the number has been on a downward trend for the past five seasons - dramatically so over the past two with thousands fewer of them in total.

Perhaps Ten Hag considered the argument that the Premier League is uniquely physical and therefore requires a particular skill-set but chose to reject that argument on the basis that the differences are far less pronounced now than they once more.

If so, there is evidence to support him.

The concern for Ten Hag - and for Martinez - might be the tactics adopted by Brighton rather than Brentford. Graham Potter's passing side opted to change their approach on the opening weekend having identified a potential weakness.

Robert Sanchez, the Brighton goalkeeper, hit 26 of his passes long - 92.9 per cent of them. That is by far the highest percentage of his Premier League career and a dramatic shift given that in total he has aimed more of his passes short than long in his 66 appearances. 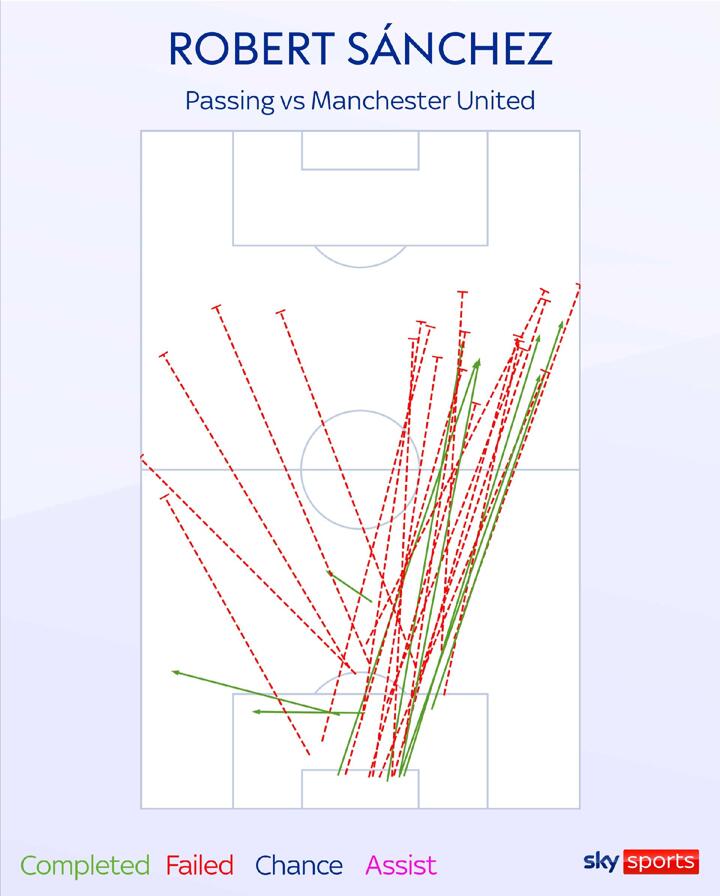 The Brighton goals had little to do with the long ball. The first stemmed from a Leandro Trossard through-ball. The second saw Brighton build from the back. But if Potter is prepared to alter his approach then it is something that Ten Hag must get used to.

The key to coping with that threat will be team cohesion and partnerships on the pitch. There were small signs of acknowledging the need for that against Brentford. Maguire and Martinez swapped to deal with long throws, a familiar tactic for many teams.

All the components must fit.

For example, Jurrien Timber took on an important role for Ajax last season. "Timber covered a lot for Martinez," says the source who has worked with their defence. "He does not have that anymore. The problem for Martinez is that the players are not aware enough."

The onus now will be on Ten Hag to find the right balance in his back line, one that will allow Martinez's best qualities to shine through. It is his progressive passing from the back, after all, that was one of the primary reasons for United bringing him in. 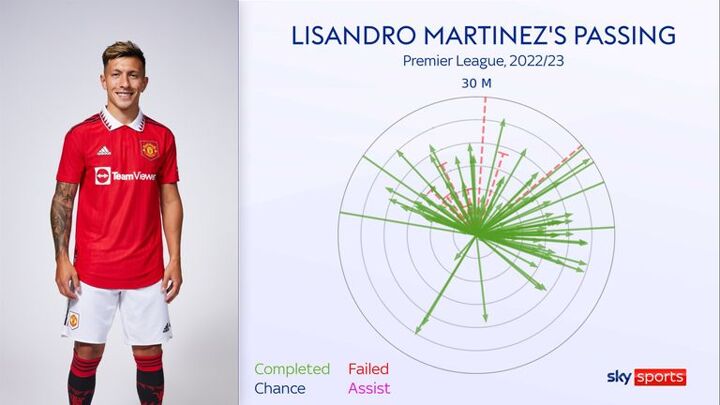 Even in the midst of this miserable start, there have been hints of that ability - and how it is causing more problems than it solves given the state of the team. There was a clear example of that within 15 seconds of Martinez's Premier League debut against Brighton.

On the face of it, his decision to chest the ball down rather than head it away straight from Brighton's kick-off was the smart play. He passed it to Diogo Dalot but the full-back dallied for a moment and Trossard was able to get a shot away that hit the side-netting.

As with his pass to David de Gea in the build-up to Brentford's second goal, it was the nervousness of others that left Martinez partly culpable. Those were decisions that his coach would have encouraged. They are undermined if others cannot deal with the ball. 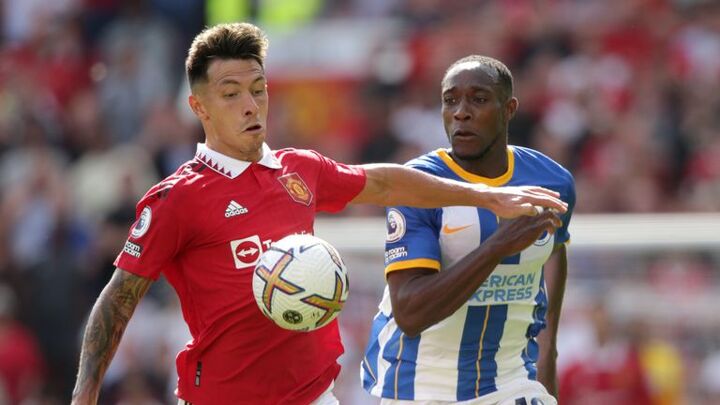 Against Brighton, there was the crisp pass away from danger in the seventh minute that allowed United to build and drew warm applause from the then still hopeful Old Trafford crowd. After 16 minutes, there was a delightful dink over the head of Adam Lallana.

Martinez fans might point to a passing accuracy of 92.9 per cent so far. The only current Premier League defenders who can better that are Ruben Dias and Aymeric Laporte. Only Virgil van Dijk has won back possession more times in the defensive third this season.

But this Manchester United team is not Manchester City and nor is it Liverpool. Instead, the latter will be the opponents on Monday Night Football. No Nunez to deal with, just Mohamed Salah and familiar questions about Martinez's Premier League credentials.

Not all of them fair.