There is no current Premier League player who has made more errors leading to goals than Hugo Lloris since he signed for Tottenham in 2012. Even his recent injury layoff came as a result of an awkward fall against Brighton that presented Neal Maupay with an easy goal. Spurs fans have had no choice but to become accustomed to the mistakes. 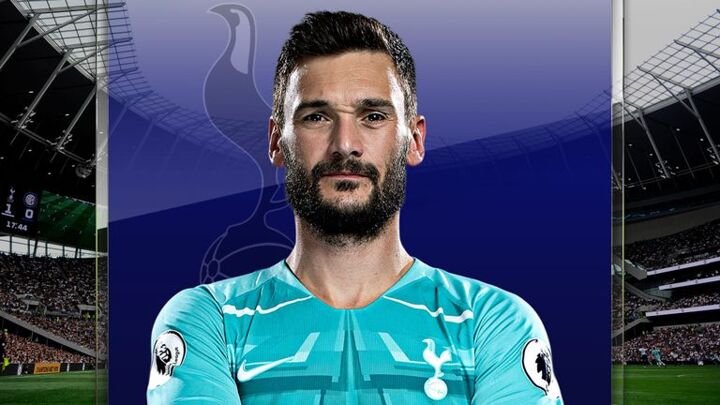 There was the Mohamed Salah header that he contrived to make a mess of in March. That one was costly, gifting the points to Liverpool at Anfield. In the previous season, there was the cross that he flapped at that allowed Alvaro Morata to score for Chelsea. Against Manchester City in 2017, he was even to blame for both goals conceded in a 2-2 draw.

Many Tottenham supporters have not forgotten his tame attempt to keep out Kieran Gibbs' late shot that allowed Arsenal to salvage a point at the Emirates Stadium. Lloris has a long and troubling history of saving some of his very worst moments for the biggest matches.

The problem is that these errors do not reflect the overall picture of his performance levels. Instead, they distort it. The image of his ability is warped by these moments. Half of his 18 errors leading to goals in the Premier League have come against big-six rivals. They are high profile. This is the man who made a huge error in the World Cup final, after all. 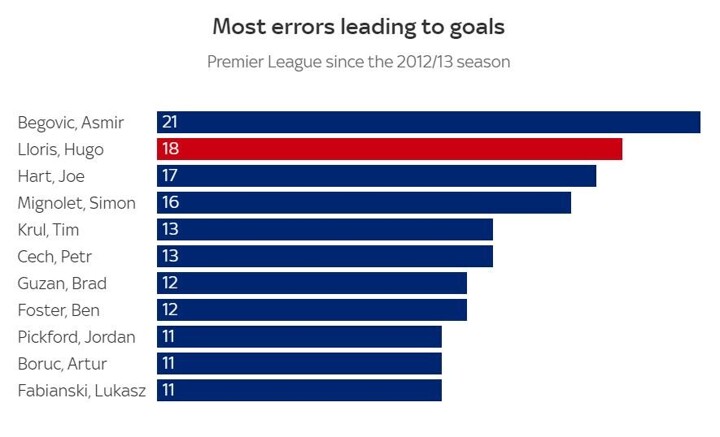 It might then come as a surprise to some that there is no goalkeeper in the Premier League who has saved his team more goals since Opta began collecting their expected-goals data in 2013. Lloris not only stops the shots that other goalkeepers do not, the analysis reveals that he has done so consistently throughout his long Premier League career.

The post-shot expected-goals model calculates the quality of a shot based on variables such as the angle and distance, the type of shot it was, the type of pass that led to the shot, and the goalmouth location where the shot ended up. By taking into account thousands of examples, it can establish the likelihood that this shot would result in a goal. 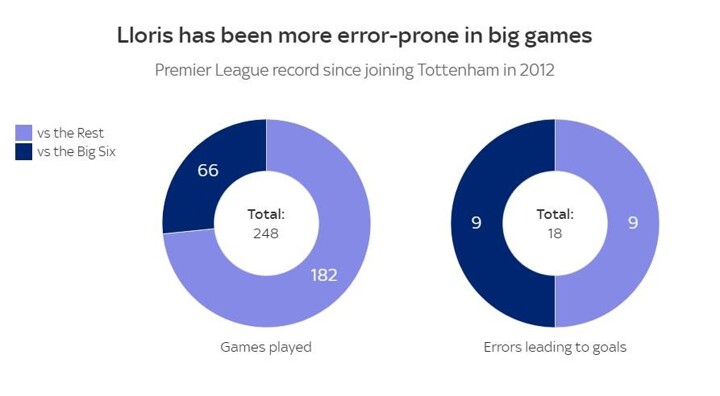 Over the course of the past seven seasons, Lloris has conceded almost 33 fewer goals than would have been expected based on the quality of shots that he has faced. Nobody else comes close and it is not just because he has been around for longer than most.

Manchester United goalkeeper David de Gea has faced more shots on target in that time but even he has only saved his team between 13 and 14 goals. The highly-rated Manchester City goalkeeper Ederson has actually conceded more than would have been expected. 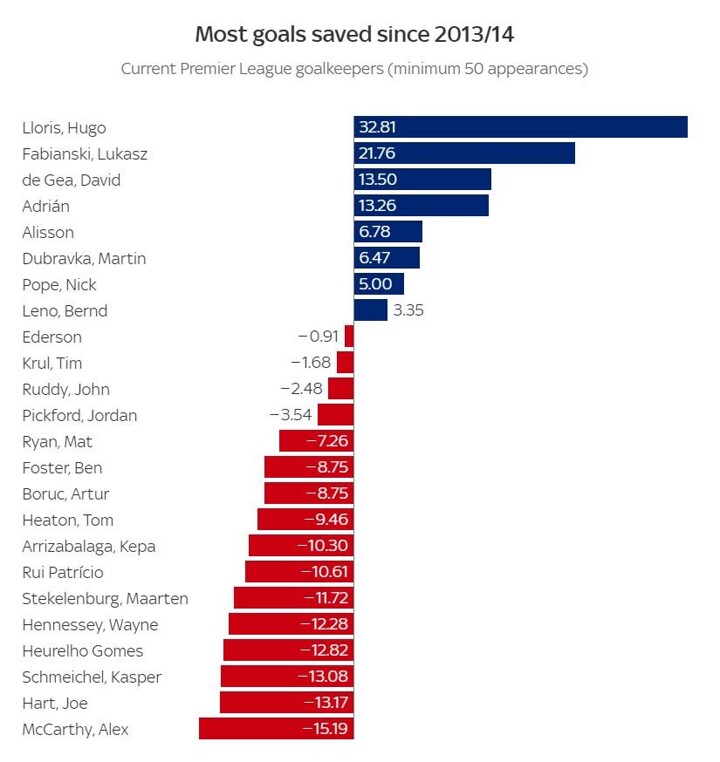 This season alone Lloris has conceded only nine goals when the statistics suggest that the average goalkeeper would have been expected to let in around 15 from those shots faced.

It has been his Tottenham career in microcosm. Those nine matches so far have included the mistake at Brighton and another against Southampton when he was dispossessed by Danny Ings. It was a horrible moment but it was followed by a fine stop to deny James Ward-Prowse and an acrobatic piece of goalkeeping to keep out Maya Yoshida's header. 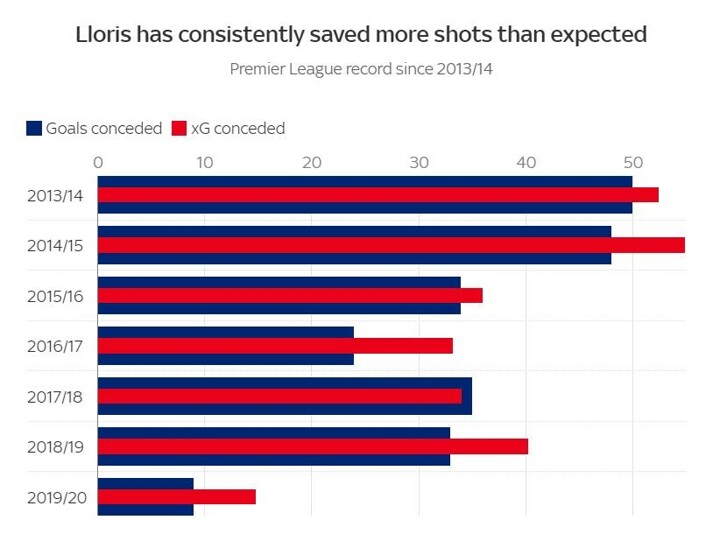 "He is so strong mentally and of course showed that he wasn't affected by this situation," said then Tottenham manager Mauricio Pochettino afterwards. Every error is seen as typical Lloris but the heroics that intersperse these poor moments are just as typical.

The Tottenham captain is a truly elite shot-stopper.

How does he do it?

There are some technical qualities that set him apart from many of his peers. Although Lloris is famed for racing from his line to sweep up behind a high defensive line, when facing shots from distance he tends to take up a position much closer to his goal-line than is normal.

There is little to be gained from narrowing the angle on shots from long range. Instead, Lloris' approach buys himself that extra split-second in which to make the save, backing his agility to keep out all but the most fiercely hit shots into the corner of the net.

On occasion, it can be his undoing. There was criticism - as one might expect - when he conceded seven against Bayern Munich. The reality was that he was on the receiving end of some of the most accurate and impressive shooting that has been seen in a Champions League game - the biggest gap between goals and expected goals ever recorded.

The full picture is the one that has emerged over many years and almost 250 Premier League appearances. Lloris' methods work. He saves more goals than anyone else and he has done it consistently so there can be no suggestion of fortune. In all but one of the past seven seasons, he has saved an above-average number of shots. His way works.

The mistakes? Even they should be put into context. A number of them have been with the ball at his feet but Lloris has been expected to pass out from the back far more than other goalkeepers. Since the summer of 2015, he has attempted more than 3000 passes within his own half. No other Premier League goalkeeper has attempted even 2000 such passes. 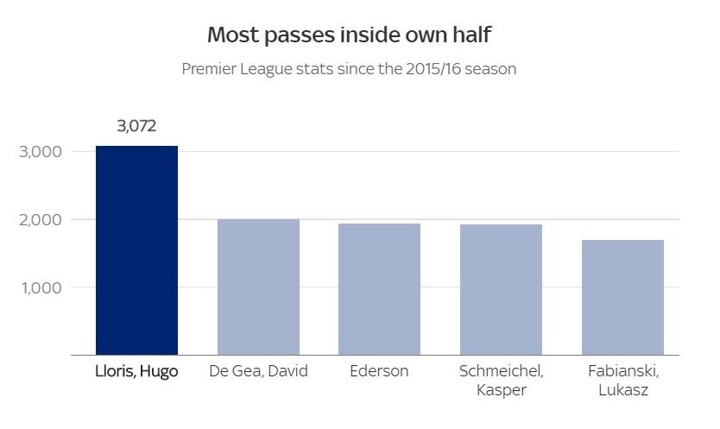 Pochettino referenced this after the mistake against Southampton in October. "You don't need to blame Hugo," he said. "Blame me because I demand him to play in that way."

The same can be said of those ill-judged decisions to race from his line - an element of his game that led to a goal for Barcelona and a red card against PSV last season.

Opta defines 'keeper sweepings' as situations when a goalkeeper anticipates danger and rushes off their line to try to either cut out an attacking pass in a race with the opposition player or to close-down an opponent. No Premier League goalkeeper has made anywhere near as many accurate keeper sweepings as Lloris over the past five seasons. 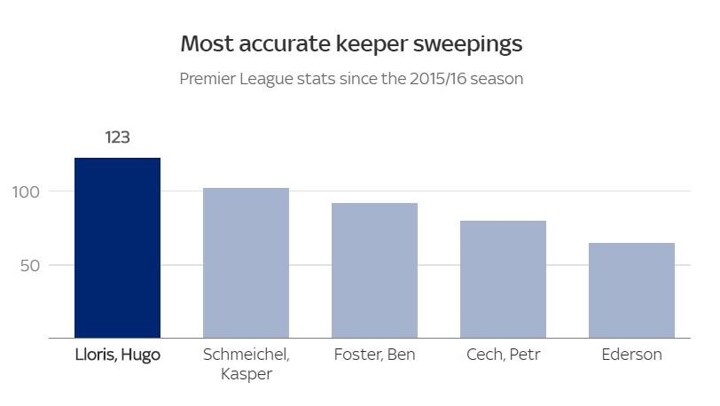 None of which is enough to excuse the errors entirely. There have been too many. Lloris knows that. But the next time that the France No.1 makes a mistake, perhaps it is worth keeping the same cool head that managers for club and country have maintained over the years. They know the truth.

Hugo Lloris is a world-class goalkeeper and he has the record to prove it.