Having impressed under a transfer ban in his first season, Frank Lampard was backed to the tune of £230million last summer to take Chelsea to the next level. 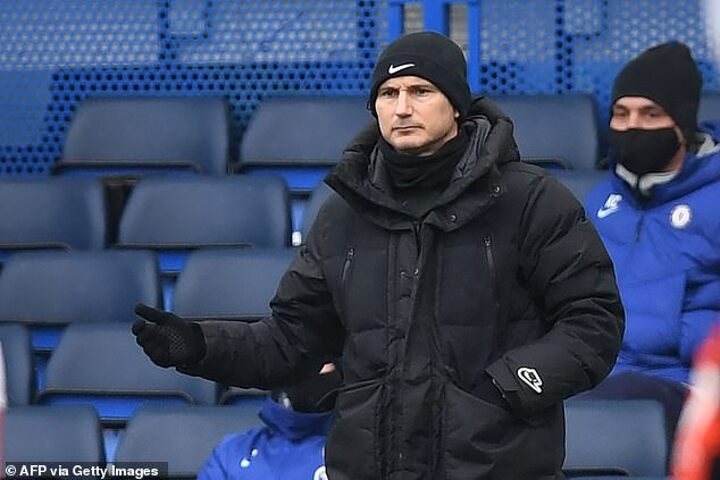 For that sort of money the belief was a title challenge and perhaps a deeper run in the Champions League compared to recent seasons.

What instead transpired was a divided, bloated squad that has fallen behind rivals and is sat slumped in ninth, 11 points off leaders Manchester United. 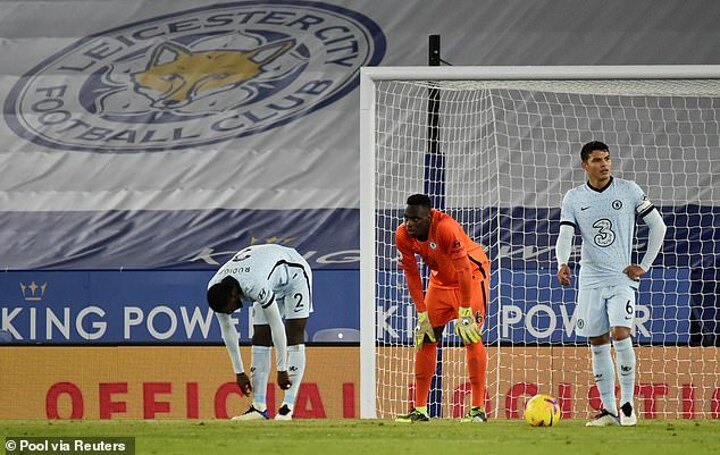 Lampard had targets in mind, Premier League proven players such as Declan Rice, but he was instead given European starlets such as Kai Havertz and Timo Werner.

Whether he really wanted those two remains somewhat hazy but they proved two of nine that arrived last summer as Lampard looked to overhaul his young side.

Sportsmail looks at all nine signings and works out if they have been a hit, a miss or whether the jury remains out.

Whenever a player moves for a fee just shy of £90m, patience is not really part of the deal.

Not when you've been operating at a top level with Bayer Leverkusen and the Germany national team, previously, as Kai Havertz had been.

And yet he has shown he is human, another young player finding life in the Premier League tough to get to grips with - and it has shown. 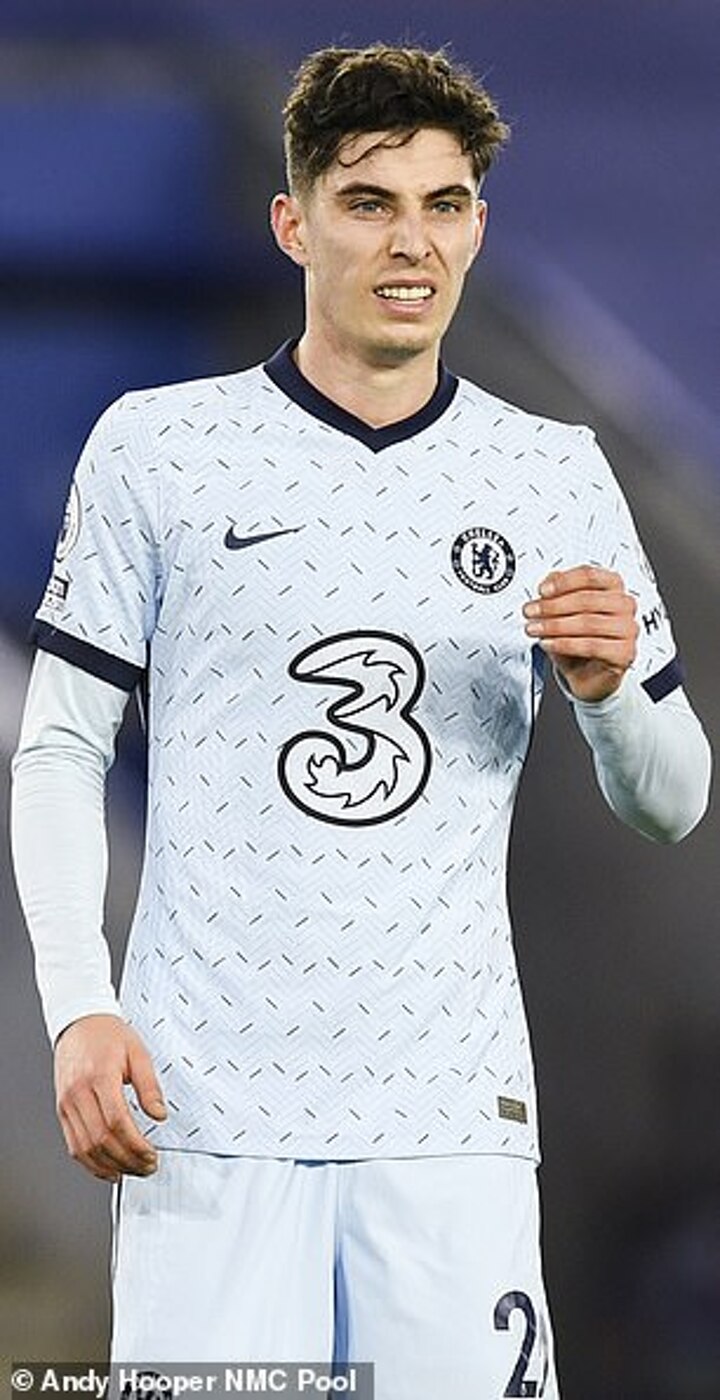 The 21-year-old hasn't completed 90 minutes in the Premier League in three months and was once again taken off with just over 20 minutes to play as Chelsea flopped in a 2-0 defeat at Leicester recently.

There have been question marks over his willingness to improve, arrest the quite obvious slump he finds himself in, but Lampard was quick to rubbish any suggestions of an attitude problem.

'I can officially say from working with Kai that desire is absolutely not part of the issue,' he said. 'Is he as confident right now, at this minute, as he can be or will be? No, because he is having a tough moment, as are other members of the squad.'

A new boss could finally ignite Havertz into life because under Lampard he was proving to be a very costly mistake by Chelsea.

Putting injuries to one side, it is hard to argue that Christian Pulisic has not succeeded in a Chelsea shirt since arriving from Borussia Dortmund.

It is easy to forget that Pulisic is just 22 and the United States international already looks comfortable in the biggest moments.

Former US international Alexi Lalas even claimed that Pulisic is 'too good' for this Chelsea team.

While it was been a slow start to the 2020-21 campaign, he ended last season in electrifying fashion, producing a goal or assist in seven of the last nine matches.

Bags of talent and versatile enough to play across the front line, Chelsea have a gem in Pulisic that just needs to shine more consistently now. 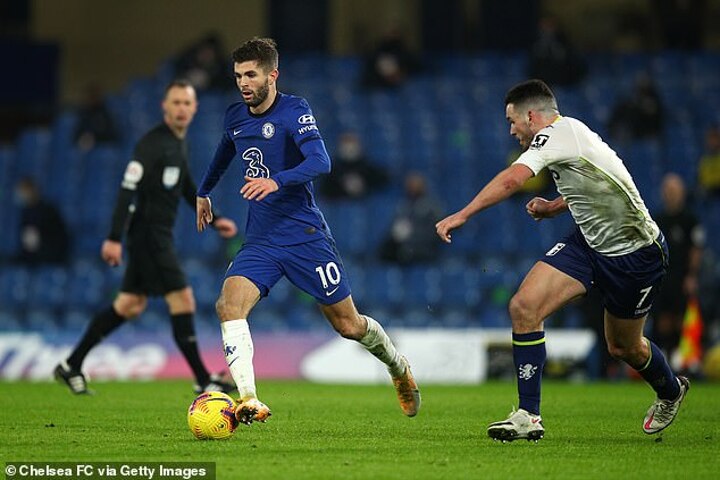 Even with just Luton goalkeeper Simon Sluga to beat at the weekend in the FA Cup, Timo Werner still fluffed his lines.

The German buried his head in his shirt after seeing his penalty saved. It was the latest episode in a string of disappointments that have come for the striker in a Chelsea shirt.

No player has played more than Werner so far this season, the former RB Leipzig striker featuring in 28 games, totalling up 2,028 minutes.

Nine goals from those 28 matches is not what was expected of him when Chelsea parted with £53m to beat Liverpool to his signature.

The imminent of Thomas Tuchel it is hoped will light the fire under Werner to help him rediscover his Leipzig form that saw him become one of the best strikers in Europe.

Under Lampard he proved nothing more than a pale imitation - and that has to change. 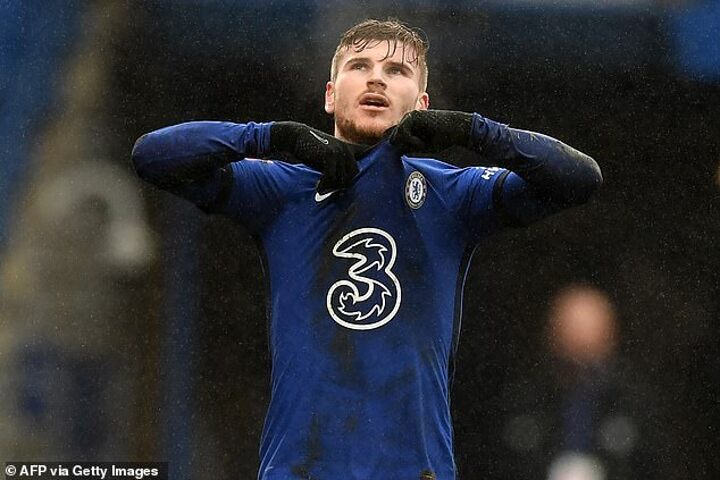 Part of Lampard's focus in the transfer market was a desire to get Premier League proven talent and while he was unable to land Declan Rice or James Tarkowski he was successful in landing Ben Chilwell.

The England international caught the eye with Leicester City and it took a deal to the tune of £50m to bring him down to London.

At 24, Chilwell has plenty left in the tank and has already established himself as the No 1 left back, making 22 appearances already this season.

'You believed in me and showed faith to bring me to the club I now love. I will always be grateful. Thank you gaffer,' Chilwell tweeted in response to Lampard's sacking.

As Chelsea's leading assist maker in the league this season with four - five in all competitions - Chilwell has been an unquestionable hit that continues to go from strength to strength.

A major asset to the new boss. 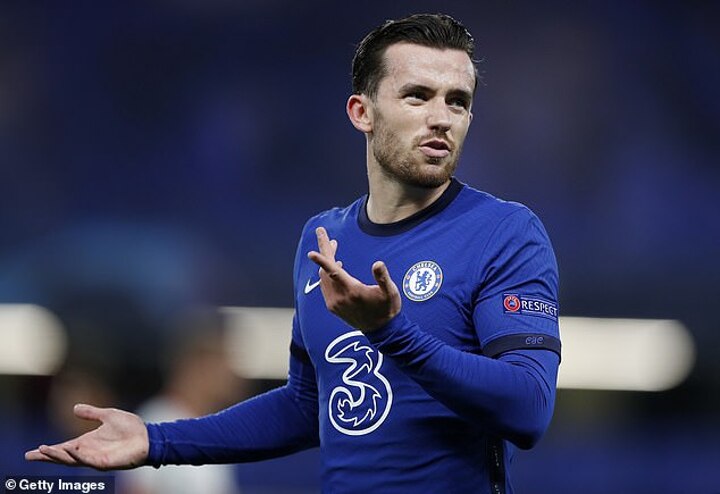 Ask a group of Chelsea fans about the former Real Madrid man and it will raise the question, just what does he do really well?

The answer is not totally clear as Kovacic struggled to settle in Lampard's system and had a number of particularly poor performances in the run up to his manager's sacking.

Playing in a midfield two with Mason Mount, Kovacic was being shown up by the academy star and has failed to emphatically repay the £44m it took to make his loan switch permanent.

Unlike Havertz, Kovacic has had plenty of time in west London to get acclimatised but under Lampard he never looked comfortable and it showed.

Will need to step up when the next boss arrives or he could find himself on the chopping block. 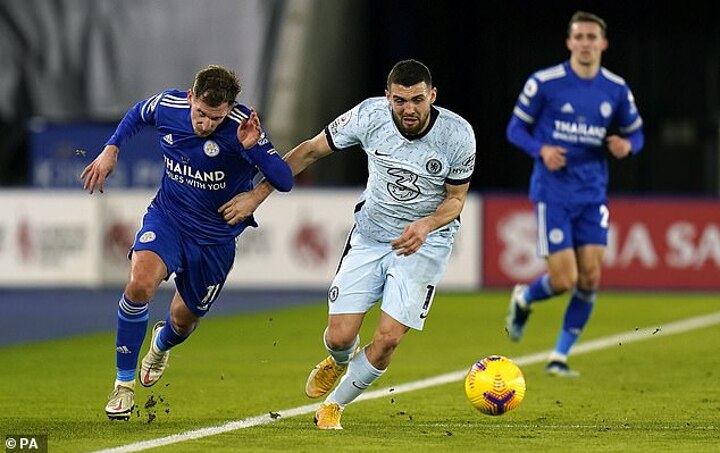 It spoke volumes as to how highly Lampard rated Ziyech that the now-axed boss felt the dip in form began when Ziyech went down with a hamstring injury in December.

The Morocco international was injured against Leeds and Chelsea went on to win just one of the six games that followed.

He has just two goals and four assists in 17 games but those stats in isolation would not tell the full story of Ziyech and his influence on proceedings.

The Ajax star joined for £38m and has looked much more at home in the Premier League than both Havertz and Werner, who arrived from the Bundesliga.

Ziyech's final season in Holland concluded with 21 assists and, certainly, he will be expected to increase his output for the Blues.

But the early signs are good and at 27 should be entering the prime years of his career. 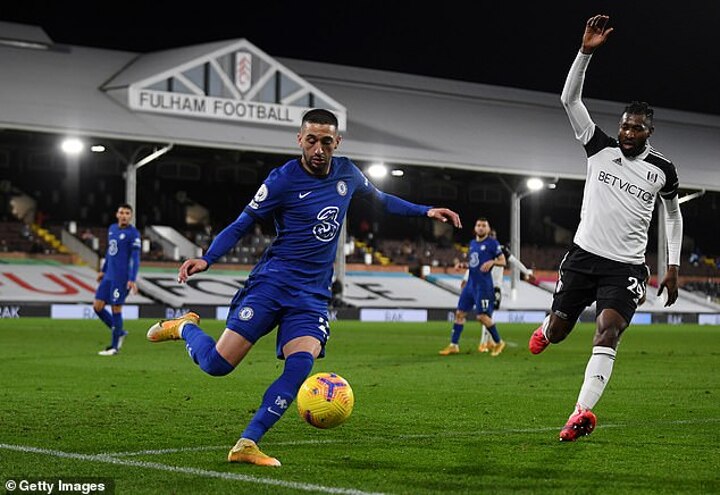 It proved one of the bones of real contention in the end but there was no way Lampard was going to be pushed into playing Kepa Arrizabalaga in goal.

The Spaniard, who became the world's most expensive goalkeeper when he joined Chelsea for £72m in 2018, proved error-strewn and Lampard wanted his own man, a man he could trust, in goal.

Despite being unable to shift Arrizabalaga, who joined on a seven-year deal, Chelsea signed off on Edouard Mendy at Rennes and it has proven a wise decision indeed.

Mendy signed for £22m and quickly established himself as No 1.

He has 11 clean sheets from 22 games so far and has shown he is up to the physical challenge that English football represents.

Former Chelsea goalkeeper Mark Schwarzer gave him 'a B+ at the moment, maybe an A-' when quizzed on the shot-stopper by Stadium Astro's YouTube channel and it is difficult to disagree with that assessment.

A safe pair of hands in a position that had looked to be a real problem area. 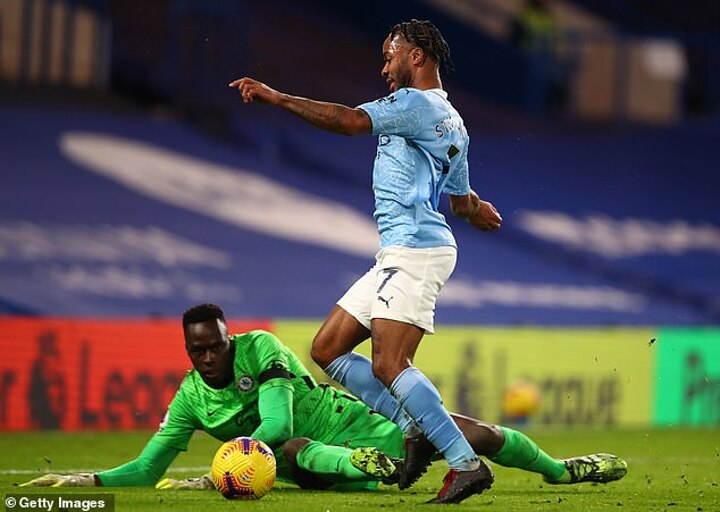 One of Lampard's struggles was his squad had five centre backs that all felt deserving of a starting spot.

But when it came down to it, few were picked with the consistency that Thiago Silva was - and for good reason.

Chelsea may have navigated themselves into the top four in Lampard's first season but defensively it was unorganised and a major concern.

Silva was coaxed away from Paris Saint-Germain to Chelsea on a free transfer last summer with Lampard of the belief that the 36-year-old's leadership could prove essential in a particularly young dressing room.

The Brazilian has many more plusses than minuses, despite the recent rut, and is proving a valuable mentor alongside Kurt Zouma.

Simply put, he has to be let off the hook.

Sarr was picked up on a free after leaving Nice and the 22-year-old put pen to paper on a five-year deal at Stamford Bridge.

But any hopes that he would quickly slot into the centre of defence for the first team were extinguished when it was revealed he would immediately go out on loan.

Sarr caught the eye in France as he made 119 appearances for Nice, scoring three goals, and a number of top European sides were ready to rival Chelsea for his signature.

Considered one for the future given Silva is in the twilight of his career, Sarr was described as an opportunity Chelsea 'could not miss', according to director Marina Granovskaia.

He had to be patient to get into Porto's team but has started to impress and as rumours swirl RB Leipzig's Dayot Upamecano is high up the summer wishlist, Sarr will be keen to remind his employers what they already have when his loan ends in June. 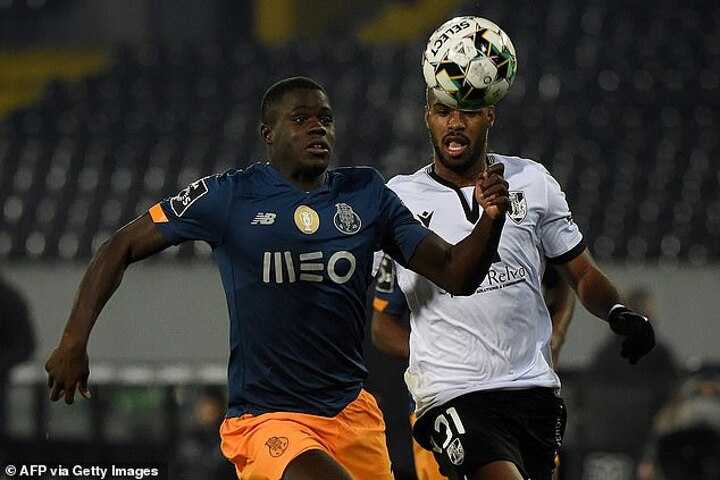