An almighty rebuilding job awaits Barcelona and their incoming manager Ronald Koeman as they try and recover from that eight-goal humbling by Bayern Munich and a rare trophyless season. 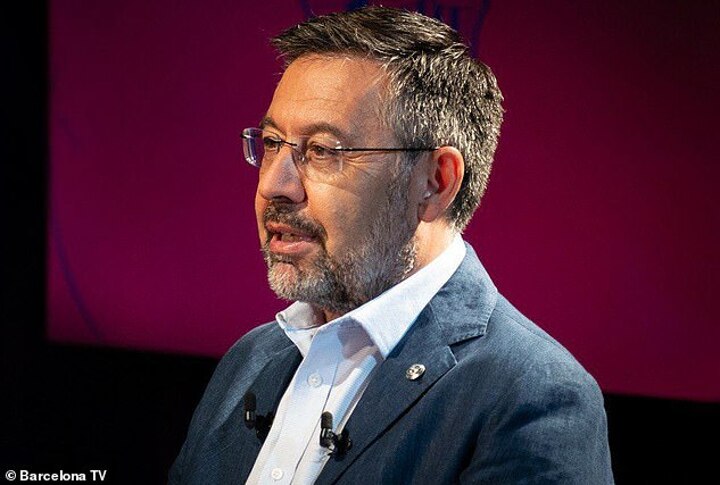 But president Josep Bartomeu has - wisely or not - shown Barcelona's hand by saying just eight members of the first-team squad are guaranteed to be staying for the new campaign.

The rest, it seems, are up for sale as the club tries to raise funds to bring in new faces and restore themselves to winning ways. 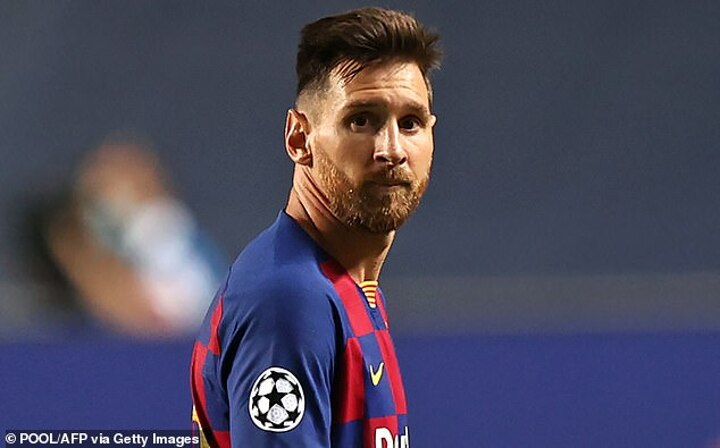 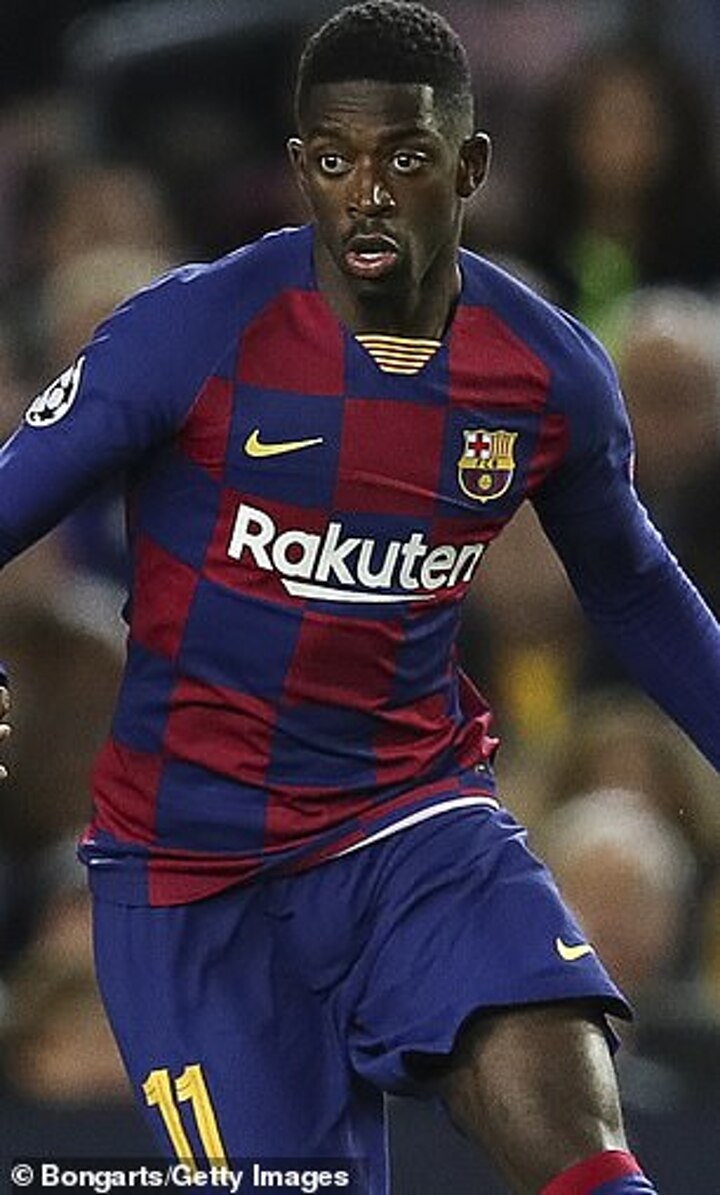 Immune from the fire sale are club talisman Lionel Messi, described by Bartomeu as 'untouchable and non-transferable'.

And the under-fire president then added: 'But there are various non-transferable players like [Marc Andre] Ter Stegen, [Clement] Lenglet, [Nelson] Semedo, [Frenkie] De Jong, [Antoine] Griezmann, [Ousmane] Dembele... players we are counting on in the future.' 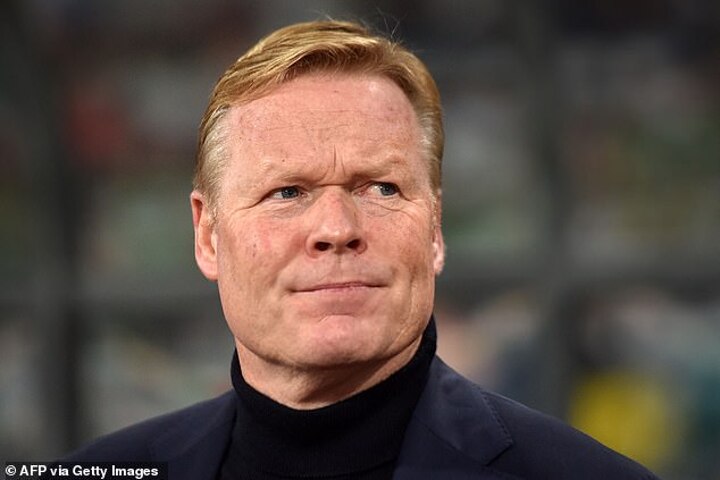 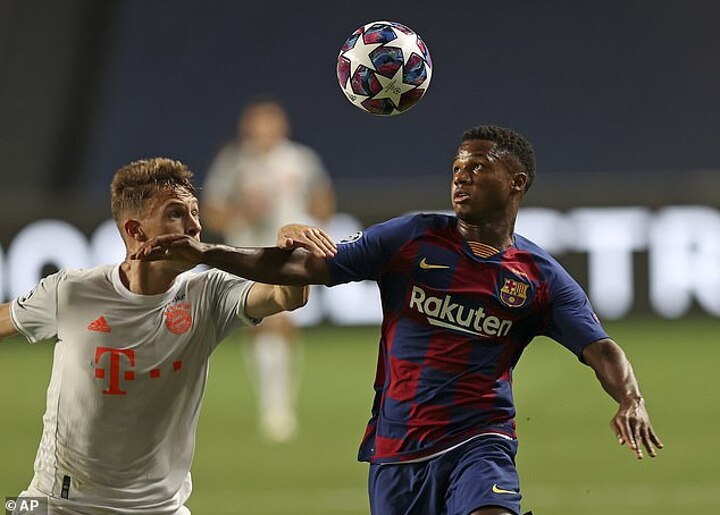 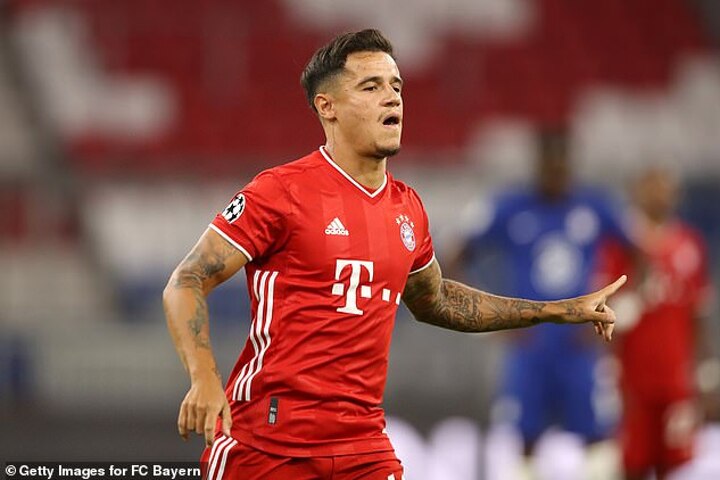 Bartomeu also name-checked the 17-year-old Ansu Fati, who was described as having 'a great future' and added to the 'non-transferable' list.

And he left the door open for Philippe Coutinho, returning from his loan at Bayern Munich, to stay if Koeman wants him.

So that's eight - and maybe nine if Coutinho is included - who won't be sold, leaving quite a few more who might well be in Barcelona's summer fire sale...

It really has been a season to forget for the French centre-back, whose prominence in the Barcelona side has been diminished by foot and knee injuries that restricted him to just 18 appearances.

And to compound matters, he then tested positive for coronavirus last week, though he wasn't with the squad on their Champions League stay in Lisbon because of injury.

Umtiti lost his place at the heart of Barcelona's defence to Clement Lenglet but has always insisted he will see out his contract until 2023 and fight for his place. 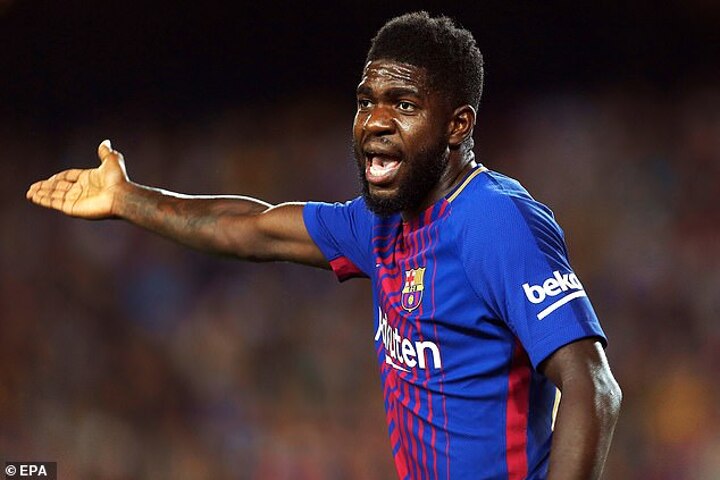 Bartomeu appears to disagree and Barcelona will hope to recoup most, if not all, of the £22.5m they paid for him in 2016.

It seems like most of the English Premier League's top six are looking for decent centre-halves at the moment so there could be interest, but will they take a gamble on someone with such a chequered injury history?

Manchester United or Chelsea could be candidates to pick him up in the weeks to come.

It was Pique who came out and said what every Barcelona fan - and no doubt quite a few of his team-mates - were thinking in the wake of Friday night's humiliation.

Pique also added he would be 'the first to leave' if necessary and it would seem Bartomeu would agree that might be a good idea. 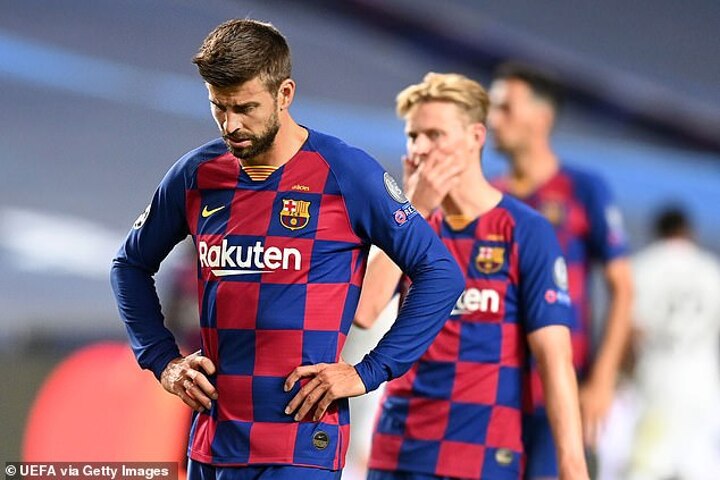 Aged 33, Pique has won every possible honour in the game but is unlikely to want to wind down in the MLS or Middle East at this stage.

Again, there may be a defender-seeking Premier League club that is willing to snap him up for a cut-price £10m or so.

Reports on Wednesday have linked Pique with newly-promoted Fulham.

Another centre-back who would appear to be surplus to requirements at Barcelona. Signed only in January 2019, Todibo suffered injury issues and was then loaned out to Bundesliga club Schalke in January this year.

He started just four league matches during his time there, largely because of a groin injury, but showed a great deal of promise when he did play.

Nonetheless, it now appears he could be moved on by Barcelona after Schalke didn't exercise their option to buy the 20-year-old for £22m.

According to reports in Spain, AC Milan and Everton are among the clubs to have expressed an interest in Todibo, with Barcelona wanting around £20m for someone who has plenty of potential. 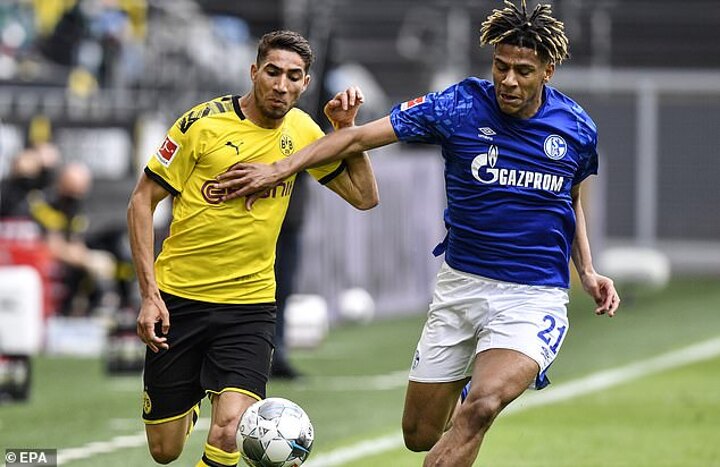 Having been a mainstay at left-back, Alba suddenly finds his career at a crossroads.

He signed a new five-year contract, with an astronomical €500million buy-out clause, in March last year, so no doubt Alba expected to see out his days at the Nou Camp.

Obviously Barcelona will have to reduce their asking price - maybe to £30m or under - and they'll be hard pressed in the current climate to find anyone willing to match Alba's €10m-a-season salary for a 31-year-old.

A loan deal to another leading European club is a possibility with Barcelona contributing a chunk of his wages potentially the only way to get him out the door. 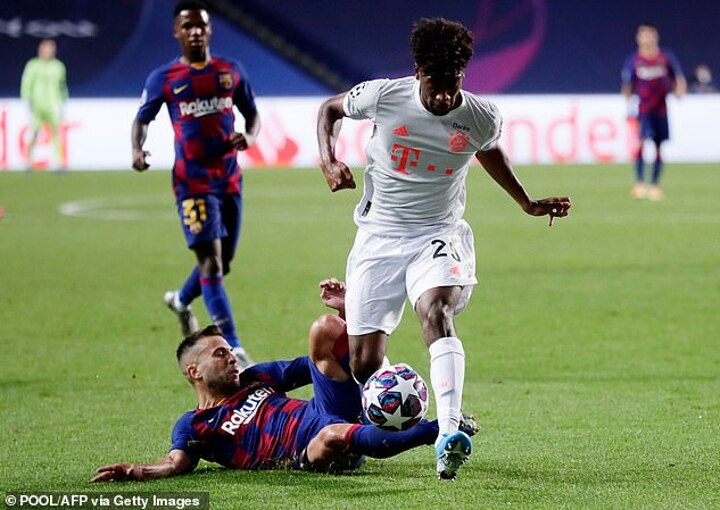 Another whose time with Barcelona could be all-too-fleeting. Signed only a year ago from Real Betis, Junior featured in 23 matches last season in between injury interruptions.

Barcelona signed the left-back to a five-year deal for £15m plus a further £10m in add-ons and will wish to get all of that back for a player still only 23.

It has been suggested that Junior will be sold to Inter Milan in part-exchange for striker Lautaro Martinez, the Argentine being their No 1 summer target. Or at least he was before this shake-up. 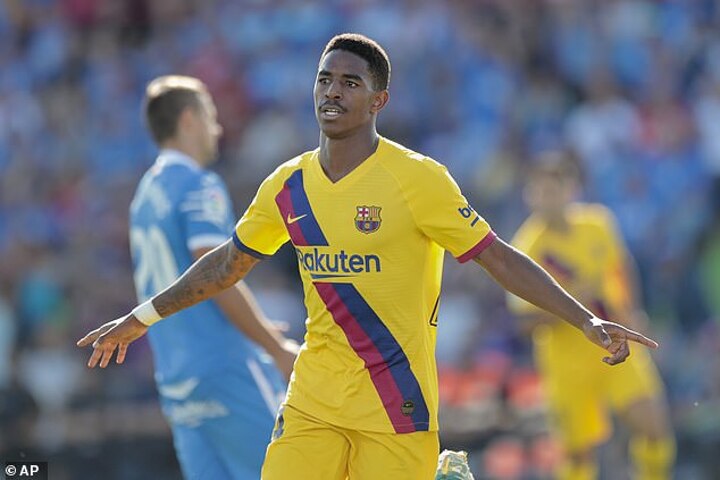 He looked completely overwhelmed in the midfield battle with Bayern on Friday night and was the one sacrificed for Antoine Griezmann at half-time with Barcelona trailing 4-1.

So despite being a reliable and consistent performer who appeared in 39 games for Barcelona during the season, he could well be on the move.

Sergi has been linked to Manchester City but the Premier League club have tried to quieten the speculation.

Barcelona will demand £35m or more for a player who can operate at right-back or in midfield and has two years remaining on his current deal. 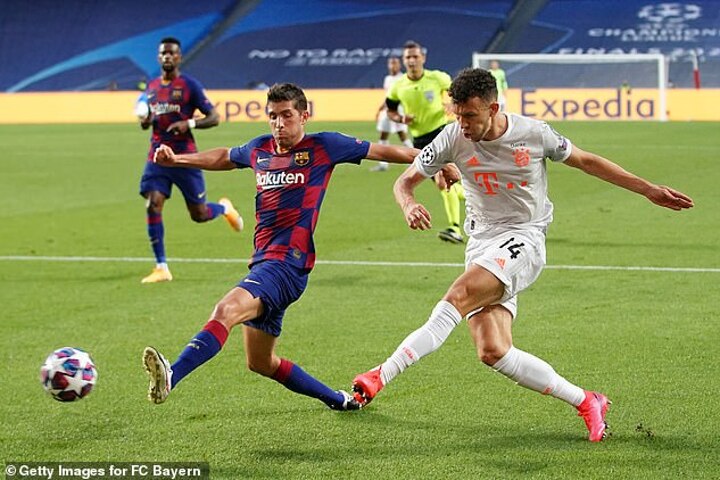 You'd have thought a wise old head like the 32-year-old midfielder could come in handy as Barcelona completely revamp their squad.

That's especially true when he has such a high buy-out clause of £440m on a contract lasting until 2023 that he is essentially unable to move anywhere.

But it seems Barcelona could move him on at the earliest opportunity despite featuring in 43 matches over the course of the last season.

Surely there will be interest in Busquets, valued at around £25m, who should have two or three more years at the top to offer.

His unexpected non-inclusion in Bartomeu's list means stories of interest have yet to appear but you can see him doing a job for Juventus or one of the Milan clubs. 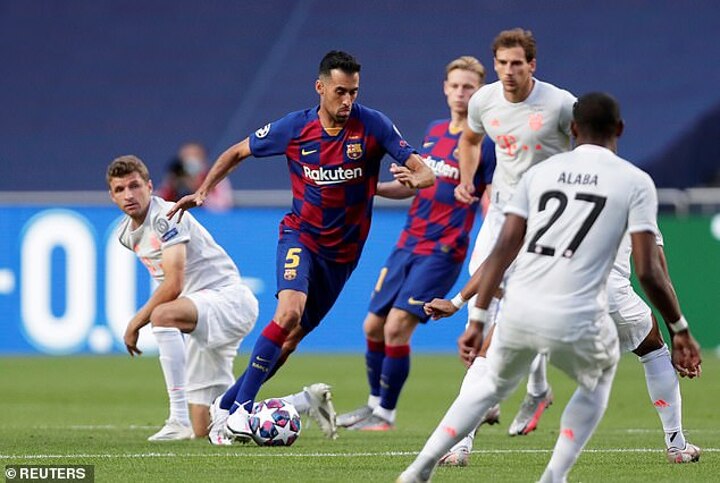 The Croatian midfielder, 32, appeared to be one of those transfer-listed for this summer even before the Bayern result happened with his contract set to expire next summer.

Links with Sevilla have been played down by their sporting director Monchi and Rakitic has now been linked with a move to the Premier League with Arsenal, Tottenham and Manchester United the names in the frame.

Arsenal boss Mikel Arteta also reportedly contacted Rakitic directly to gauge his interest in a move to the Premier League.

Rakitic wasn't apparently too keen on leaving Spain but Sevilla's climb-down may force a rethink and the experienced player should be available for around £9m.

He featured prominently for Barcelona last season and should still have what it takes to perform at the top level elsewhere in Europe. 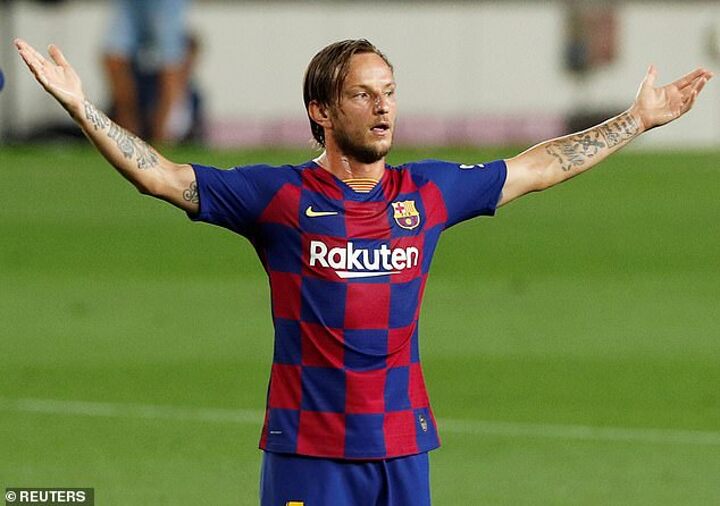 Another who was likely to be moved on this summer having spent the second half of the season out on loan at Real Betis.

At least midfielder Alena was able to get some more regular football there having found minutes hard to come by following his graduation from the academy a few years back.

With new players coming in, this isn't likely to change and Alena could well join another LaLiga club for somewhere in the £10m-£15m range. 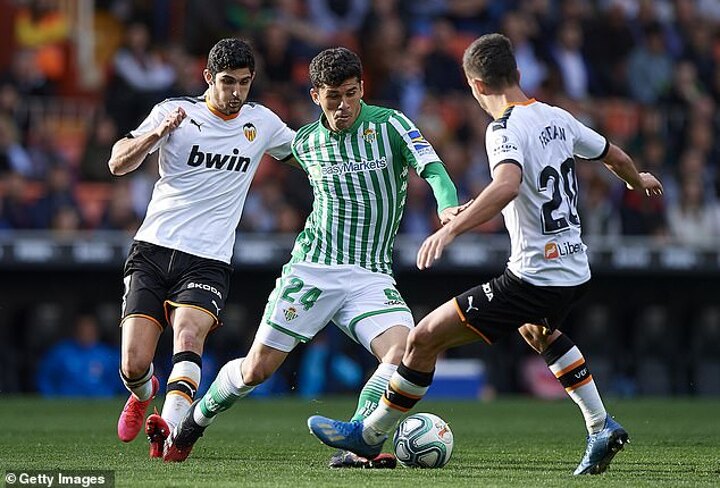 The Chilean midfielder is out of contract next summer anyway so Barcelona were always likely to try and get a bit of cash for him this year.

Since it appears Bartomeu and Koeman have no place for the 33-year-old battler, he will certainly be on his way out.

Reports in Spain this week say Paris Saint-Germain are interested in Vidal, while he's also been linked with Manchester United and Inter Milan.

While obviously any suitor is only likely to get a couple of seasons out of him, Vidal could prove a snip at £8m or £9m. 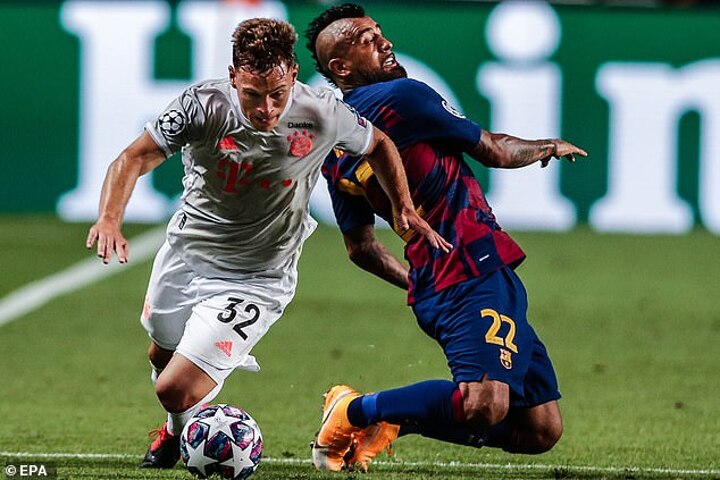 Loans in recent seasons to Inter Milan and Celta Vigo have meant the Brazilian midfielder hasn't felt a part of the Barcelona set-up for a long time.

There have been suggestions the 27-year-old could join Celta permanently but the rumour mill has been in overdrive regarding him for a while.

First Rafinha was linked with a move to Shanghai Shenhua in China, then there were suggestions Inter were keen to have him back at the San Siro.

And earlier this month, Premier League duo Everton and Wolves had reportedly enquired about a player valued at £14.5m.

He certainly won't be short of interest as he looks to make a clean break from Barca. 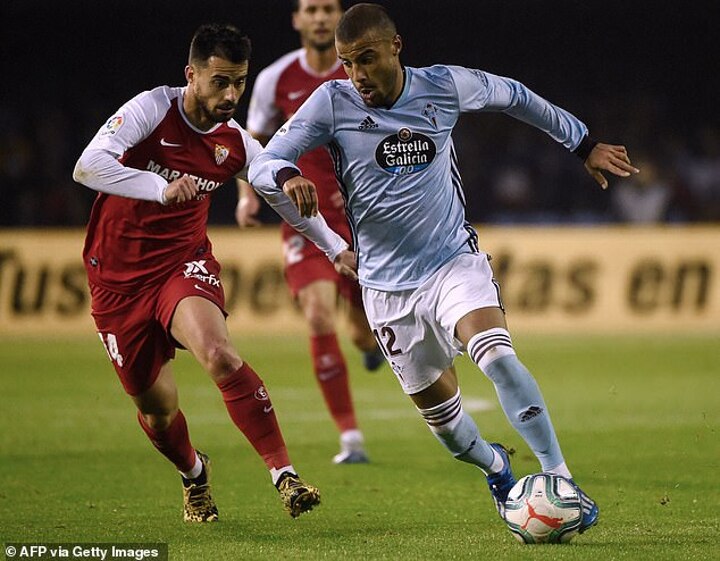 The biggest name on the for-sale list, Suarez could be on the move despite an impressive return of 21 goals and 12 assists in 36 matches for Barcelona this season.

Reports say Ajax's director of football Marc Overmars is already working on efforts to get him back to Amsterdam.

It certainly seems a worthwhile move for Suarez, who was out of contract at Barcelona next year anyway, and you can see him winding up opposition defences and banging in the goals in Holland for a few years to come. 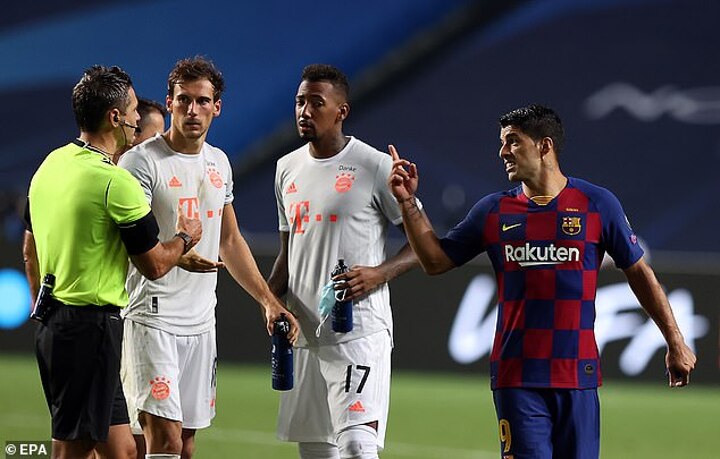 What a strange cameo it has been for Barcelona's emergency striker. Signed in February with special dispensation from LaLiga amid an injury crisis, the Denmark international has scored just once for the club.

The break caused by the coronavirus pandemic led to him not really being needed as players recovered and now, despite signing a four-and-a-half year contract, he'll almost certainly be on the move.

There is plenty of demand it would seem with West Ham and Everton linked with a striker who has experience of playing in England following his time at Middlesbrough.

Barcelona want £18m for him - roughly what they paid just six months ago - and it seems they will get it. 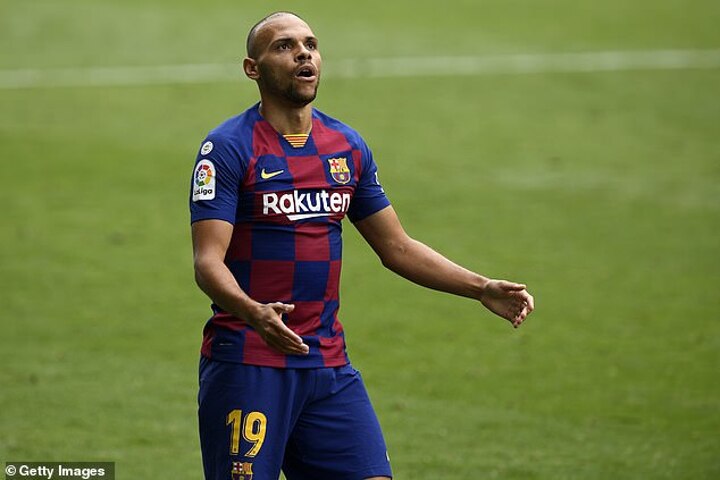