Pedri has been one of the revelations in LaLiga Santander this season. His performances since officially arriving at Barcelona from Las Palmas have been of a player with experience beyond his years. 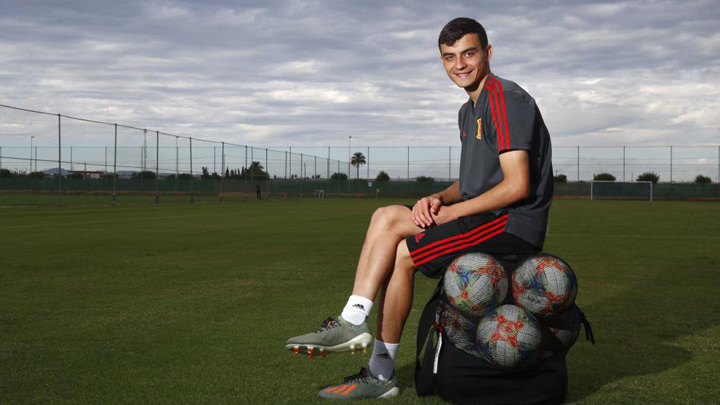 The 17-year-old has earned himself a regular spot in Ronald Koeman's side, playing either as a No.10 or as a right winger. Barcelona signed him from Las Palmas in the summer of 2019 before loaning him back to the Canary Islands club for the rest of the season. Pedri's now on the verge of a senior international call-up for Spain and is set to make his Under-21 debut on Thursday.

MARCA spoke to Toni Otero, former Las Palmas sporting director, and Ruben Delgado, who coached Pedri as a boy, to find out a little bit more about his journey to the top.

"I enjoyed [watching] him a lot," Delgado said. "From the age of nine to 12 and sure it's really easy to talk about him now, but my family and his know it. I was convinced that he'd make it from the first time I saw him, though I didn't imagine he'd do it so quickly, granted. Aside from his footballing qualities, he stood out for his maturity as a person. The respect and treatment he always showed towards his opponents, teammates and coaches was different to the others."

Otero revealed how, at the age of 16, Pedri was called up to the first team at Las Palmas.

"It was Angel, a player at the time and now Pepe Mel's assistant, who told us to bring him up from the youth team to the first team," Otero said. "We knew that he stood out, but I'll admit that I didn't expect this evolution."

It wasn't long before Pedri started attracting the attention of bigger clubs, even before he'd made his senior debut for Las Palmas.

"If he kept that level, he was Iniesta," Otero added. "Las Palmas weren't going through a good time financially speaking and I told Barcelona to come and watch him. We played a friendly against Almeria and he was unreal. He played with incredible self-confidence and composure.

"The [scouting] reports were so good and, the next game, against Betis, they sent [Jose Mari] Bakero and Ramon Planes to watch him. That was when they stared talks to sign Pedri for Barcelona and they signed him before he'd made his [competitive] debut for the first team.

Pedri gets what Pedri wants

"He didn't know what pressure was," Delgado added. "He made the difference and plays the same now as he did with me. He enjoyed training, which is the important thing. Also, what he likes is football, just like anyone else. He's been like that since he was young. A 17-year-old who is naturally like this attracts attention.

"I was surprised by the ease with which a nine-year-old kid could do things. He always knew what he had to do. He saw the gaps that no one else did. There are kids that have their ways, but they stay. What Pedri wants, he gets. He's very hard working and he has a really good head on his shoulders. He wanted to stay in the Barcelona first team and he did it, the same as when he knew he would stay in the Las Palmas first team when they promoted him."