Luka Jovic has not had the best first year at Real Madrid, with the striker now having to isolate after being in the company of a friend who tested positive for COVID-19. 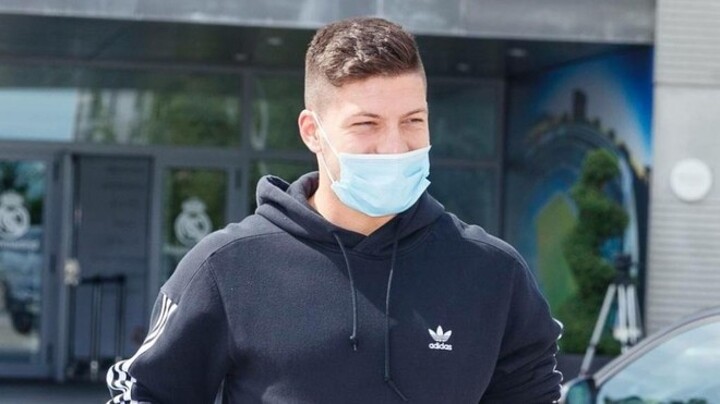 He has not been at training at Valdebebas for the last two days, although the first coronavirus test he underwent was negative.

As far as MARCA understands, Jovic's friend landed in Madrid from Belgrade on Monday at noon.

Real Madrid's protocol requires that all player visits be checked immediately upon arrival.

The friend tested positive and was immediately removed from Jovic's environment.

On Monday, despite the fact there was no training, Jovic underwent a first test, which gave a negative result.

The 22-year-old will not return to the team's environment until he has passed all the successive tests during the days established by Real Madrid's medical protocol to confirm that he has absolutely no risk of contagion.

The law marks two negatives, but Los Blancos carry out more than two in order to take the maximum precautions.

The news, revealed first by El Chiringuito de Jugones, comes to confirm Jovic's poor fortunes in his debut season in the Spanish capital.

After joining for 60 million euros from Eintracht Frankfurt last summer, having scored 27 goals for the German team, a lot was expected of the striker.

However, his performances and his off-the-pitch behaviour has been far from what Real Madrid and the club's supporters expected.

To begin with, on purely a sporting level, Jovic has scored two goals and provided two assists in just 770 minutes of action across 25 games.

In November, he suffered a hip injury that barely affected Zinedine Zidane's plans.

But that mishap was nothing compared to the injury he came back from, an extra-articular fracture in his right foot that caused him to miss the first five matches after the resumption of LaLiga Santander.

Jovic returned as a substitute against Getafe and barely played a minute away at Athletic Club.

He has also made headlines for himself off the pitch.

On March 29, Jovic was reported by Serbian police after skipping the quarantine imposed on citizens arriving from abroad after travelling to Belgrade with Real Madrid's permission, following Trey Thompkins' positive COVID-19 test.

One month later, he was summoned to appear before the Serbian prosecutor's office at the risk of a possible fine ranging from 1,275 euros to three years in prison.

In the first week of June, before the resumption of LaLiga Santander and with Jovic still injured, another controversy involving the Serb arose.

This time, together with Getafe midfielder Nemanja Maksimovic and Atletico Madrid striker Ivan Saponjic, he organised a barbeque that was followed by them going in the swimming pool, as Jovic's partner shared on social media and was later picked up by Deportes Cuatro.

The carrousel of negative news starring Jovic is now joined by him having to isolate after being in contact with a friend who tested positive for COVID-19.

This is the latest chapter in the horrible year Jovic has had since signing for Real Madrid.