Brendan Rodgers breezes into the room, hurriedly adjusts the air-conditioning and is all smiles as he sits down for his interview at the club’s training ground. Leicester are bottom of the table but there is a sense that the season starts now. 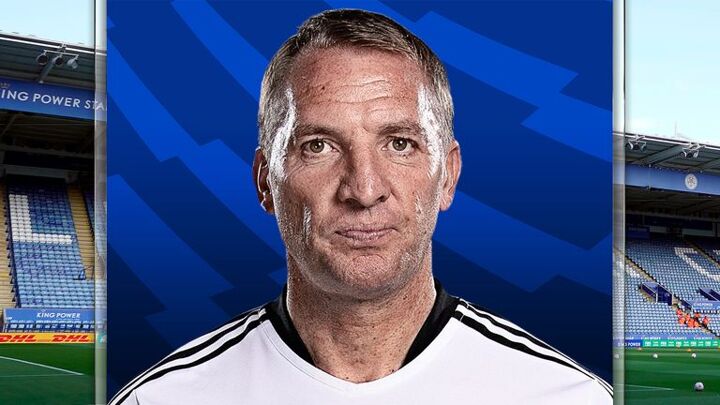 It has been the most challenging summer of his managerial career with players wanting to leave and without the funds to bring in replacements. "It is like going into a shop and walking around with no money," he tells Sky Sports. "You cannot buy anything."

But before all that, he wants to clarify the comments that caused something of a media furore on Thursday evening following the defeat to Manchester United. Headlines suggesting that he 'took a swipe at the board' do not reflect his true feelings.

"I always know there is a spin on words. I have a huge respect for the board. There is no way that I ever had a notion to expose them. They have been honest enough to say how it is. Top's notes have made it clear in terms of the thinking behind the why of the situation.

"It has clearly been a really difficult market for us. But the bigger picture was the club. For me, it is a non-story from today. Now, it is about everyone coming together. We bring on the fight and have this collective common goal of winning games and being a team."

It is unusual to see Leicester like this. The club were champions of England six years ago and that first FA Cup win came as recently as last year. The pause on spending means an adjustment for everyone - fans, players and the manager who came here to compete.

"Where we have been in the table for the last few years, that is where I want to be challenging. Everyone wants to keep pushing. But for that we have to improve our squad and we have not been able to do it. Of course, that will be difficult for the supporters."

In truth, supporters do accept it. There is nothing but gratitude to the owners who have provided the best times in the club's history. Feelings towards Rodgers are more mixed. What does he say to those who point out that he still has a mid-table budget?

"I can only judge it on the squad that I have and when I see the competitors it is clear that a lot of our competitors have improved. This is a group that needed to improve and we have not been able to do that. But that does not mean we will not try to find development.

"We wanted to challenge for European football and we were able to do that and win trophies. But I am realistic. I know what pieces are missing from our jigsaw. It is not a lack of ambition, it is just where we are at. I am having to find ways to make it better."

Here, it is a bit more complicated than it might look. Thirteen of the squad who revelled in FA Cup glory at Wembley were also in the squad on Thursday night. But the circumstances are not the same. This is a game played with the legs and in the mind, not on paper.

"Sometimes the best coach is the person who comes in to rival your position. That will drive you on. Otherwise, if there is no competition, players can get comfortable. As much as you demand things from them, they know there is no one around the corner."

There is a long breath as Rodgers is asked to reflect on the difficulties of the summer and discuss why all might not be as it seems. He is ready to explain in some detail and his words reveal that the situation with Wesley Fofana was just part of the problem.

"If you think about it, right from the beginning we had stuff around James Maddison and Harvey Barnes. You obviously had Kasper [Schmeichel] straight away when he came in. You had the situation with Youri [Tielemans]. You had Cags [Soyuncu] on a year to go.

"You also had Daniel Amartey on a year to go. Jonny Evans on a year to go. Jamie Vardy had not signed. Jannik Vestergaard maybe looking at moving on. So, you had a number of players who that can affect. Then you have the injury to Ricardo [Pereira].

"Those are 10 situations there that affect the dynamics.

"And then you have Wesley's situation on top of that.

"What it does within the changing room is that it creates doubt. The stability is affected with no new faces coming in to bring that life to it. It becomes a place where people are looking to move on. That becomes a distraction. You have to control it the best you can."

The focus now must be on finding a path through all this. Leadership has been lost but needs to come from elsewhere. "Leadership comes in different forms. When we lost Wes Morgan we lost that figurehead. Now it needs to be a combination of all of them."

With Vardy turning 36 in January, some might be past their peak. But there are others with more to give. "Some of the guys are still growing. James has pushed on. Harvey is improving. Luke Thomas has come in and done really well, Kiernan Dewsbury-Hall too."

There is an expectation that - with a World Cup in their sights - others will refocus. "I think between now and November, it is about a laser-focus on our work now. It is about us picking ourselves up and getting up that table. There are no distractions.

"It is time to be together. That includes the supporters because they are needed more than ever now. They have had an amazing few years but this is the reality of the situation. The players will feed off their energy and we want that to be as positive as it can."

But perhaps the most pertinent question is for Rodgers himself - a man who has been open about his own ambition. He came here to compete for trophies, upset the natural order of things at the top of the table. Now, by his own admission, he is targeting 40 points.

The fear among the fans is that he himself has become jaded by the situation. Just as he wanted to clarify those comments about the club's financial restrictions, he is firm about the fact that he is here to embrace the challenge. He can focus on coaching again.

"I am so excited about this challenge. It is something I embrace. The end of the season is a long way off and I have not set any targets but let's get to 40 points and then look to finish as high as we can. Can we do well in the cup competitions? That always excites us.

"Yes, pieces are missing but how can we still find the solutions? What is the best dynamic for us as a team? In terms of fixtures, we have had a tough run with us having had to play three of the top five or six teams while trying to piece our game back together.

"We have to be better with the ball. Getting that confidence back, that simplicity in our game, that creativity in our game. On top of that you have to be defensively strong. We need to be a difficult team to play against with and without the ball.

"With the start we have had, they are not going to be confident but that is the job - to galvanise them again and get them through this period. We draw a line under it now. There is an opportunity to be ourselves again. It is about hard work and focus.

"It is about the hard yards now."