The expectation heaped on the broad shoulders of Ruben Dias could hardly be higher. It is not just the initial £62m fee that Manchester City are paying Benfica for his services as they seek to find a way to regain the Premier League title. It is the fact that he arrives to find his new boss sifting through the wreckage of the worst defensive display of his managerial career. Never before had a Pep Guardiola team conceded five goals in a game prior to the 5-2 defeat at home to Leicester on Sunday. And yet, these were familiar defensive problems, albeit as part of an unfamiliar Manchester City line-up. One without Sergio Aguero up front because of injury and David Silva in midfield following his departure in the summer.

It is the loss of Vincent Kompany one year ago that was thrown into sharp focus on Sunday. This was the fixture in which he thundered home the winner in a 1-0 victory that ended Liverpool's last best chance to pip them to the Premier League title in May 2019. The juxtaposition between the joy felt that evening and the disarray at the weekend is clear.

Many felt the loss of Kompany was overstated. He made only 13 Premier League starts that season, after all. But the majority came during a relentless run-in when his undoubted leadership qualities, the calm that he brought to the defence, those organisational skills, were needed most. In fact, he won each of his last 16 games in all competitions.

Kompany was long past his best, no longer physically suited to stopping the counter-attack, but he has still been missed. Much is made of the importance of Fernandinho's role, but the struggling Rodri has never had the benefit of playing with such a vocal presence behind him. Aymeric Laporte, for all his ability, is not a leader of men in quite the same way. Dias is a different sort of character.

The making of Dias

Joao Tralhao was a coach at Benfica for 18 years and spent three of them working with Dias - the formative years just before the player broke through into the first team at the Estadio da Luz. Dias was his captain when Benfica reached the final of the UEFA Youth League. There is always regret when Benfica lose one of their own, but Tralhao is thrilled for him.

"The only feeling for him is excitement," he tells Sky Sports. "It is not easy for him to leave Benfica because he has been there so long. He arrived so young and now he is leaving. But, on the other hand, going to a club like Manchester City, playing in the Premier League for one of the most important clubs in the world, is a challenge and he is excited for that.

"All the memories I have are positive. He is an example, a role model for every young player because of what he does on the pitch, in training sessions, and how he lives off the pitch." 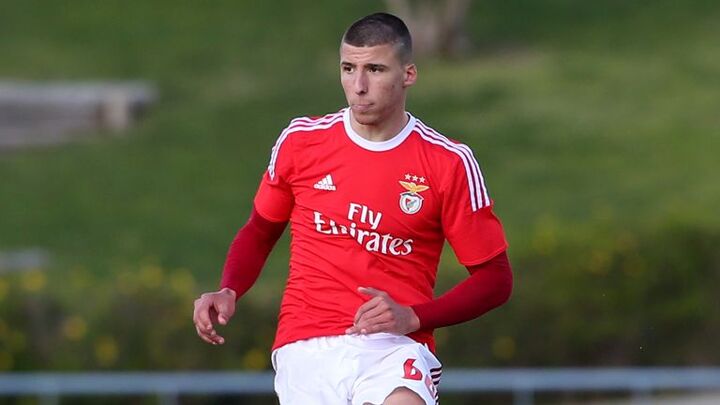 Dias grew up playing football in the corridors of his home in Amadora, just north of Lisbon, with elder brother Ivan, also a professional footballer. He still goes to watch him when he can but it soon became clear that his own journey would be a significant one. After switching from centre-forward to centre-back, he was picked up by Benfica at the age of 11.

"The indicators of his potential were there that told you he was going to have a good career," explains Tralhao. "From the moment that he arrived at the academy I knew that he was going to do very well. You could see it when he was young. But it was only when I started working closely with him at U18 level that I really knew he was going to the top.

"It was not his talent. It was his capacity to work. His focus. His mentality that he had in every session, every day. His ability to compete is amazing.

Benfica supporters soon saw that for themselves when he stepped up to play for the first team in September 2017 following the sale of Victor Lindelof to Manchester United. Dias finished that first season with a place in Portugal's World Cup squad - the youngest player that Fernando Santos took to Russia in a group packed full of European champions.

Dias took it in his stride having been groomed for the role for years. He was Portugal's captain at the U20 World Cup in 2017. Luisao, the legendary Benfica defender who he would go on to replace, commented on how he had arrived fully formed as a leader. Tralhao had made him captain at junior level but it would have been more of a shock had he not. "He knows everything about leadership.

"You will see that at City once he is adapted. He will lead everything. I mean that in a good way. He will be the coach's voice. A player who can help the team do their tasks correctly.

"He will not just be a shouting leader, showing it with that behaviour, pushing players by saying, 'Come on, come on'. As well as that, he will be the one who actually leads the tasks. Telling them how they should organise in terms of the coach's idea. He can do both."

That is exactly what is required at Manchester City, of course. The demands that Guardiola places on defenders are huge because the high line leaves them at risk of being exposed. It puts an emphasis on communication and organisation to help prevent the counter-attack.

Dias is not the quickest and perhaps that explains why City looked to other alternatives before settling on the Portuguese. But he is effective in the duels, dribbled past only once every 330 minutes in league football last season, comparing favourably to Laporte and Eric Garcia, and far better than, say, Nicolas Otamendi, who was beaten once every 99 minutes.

At Benfica, he became well accustomed to the demands of the role. 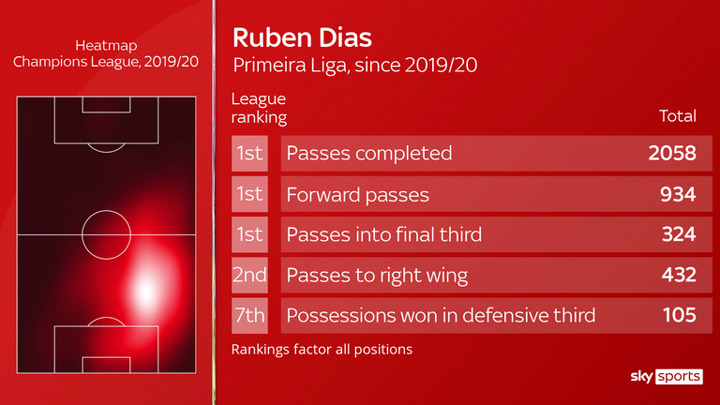 "He knows how to play in a team that is offensively minded and prepared to take risks," explains Tralhao. "He is ready to play in a defence that has to deal with situations where the team is unbalanced on transition and facing a counter-attack. He is ready for that because he is used to it at Benfica, not just in the first team but in every age-group.

"This is the way that he has been brought up, taking risks, playing one-versus-one at the back, playing to stop the counters. He is used to playing like that. That is his background so I do not see him having any problems to adapt to that way of playing.

"He is a very complete player in terms of his defensive approach. He can play with the defensive line high and space in behind him, but if you ask him to play with a low block he can do that as well. He is good on the ball, knowing when he can make the pass, so he will be able to adapt very quickly to the manager's ideas in terms of the build-up too."

It is asking a lot to expect him to solve City's defensive problems alone. But Dias could be the start of the solution, not just in his own performances but in helping to improve the performances of those around him. They are buying a model professional. They are going to need that and more.