Frank Lampard was always the romantic choice as Chelsea manager. A remarkable servant to the club as a player, their all-time leading goalscorer and one of the most decorated English footballers the game has ever seen. 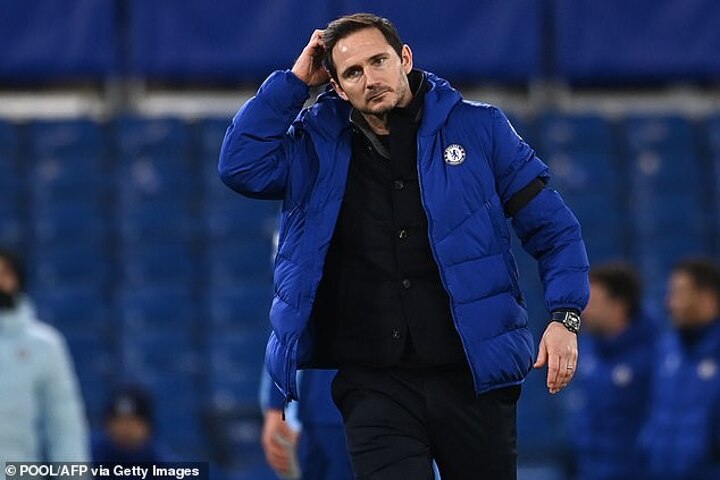 But club legend status, it seems, offers little insulation against the cold realities of management, something Lampard has discovered with his sacking on Monday morning.

Most Chelsea fans will be left upset by Roman Abramovich's latest ruthless dismissal but the club's powerbrokers were only ever interested in results and league position. 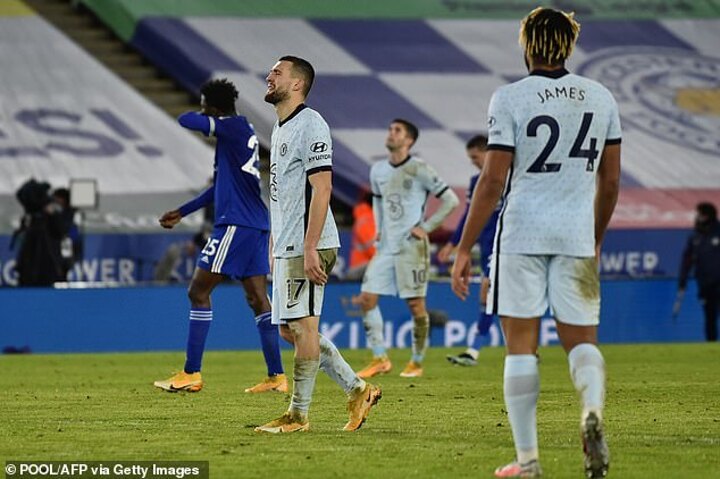 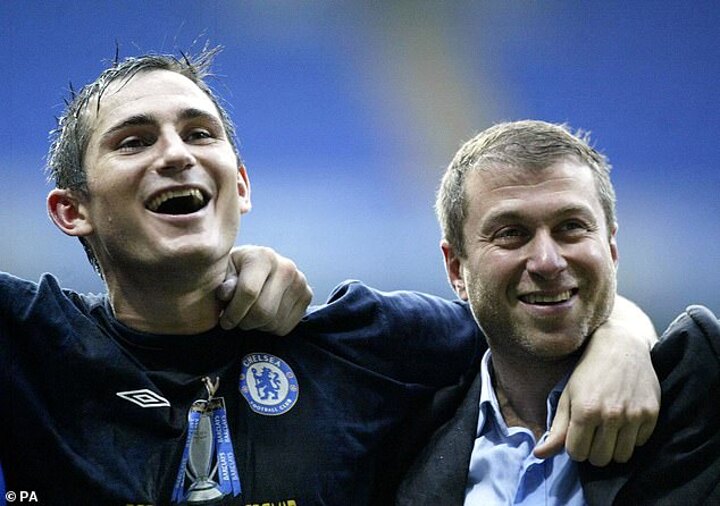 After a dreadful run of five defeats in eight Premier League matches left them a lowly ninth and out of the title picture, Lampard always looked vulnerable.

He will depart with the lowest points-per-game ratio of any Chelsea manager in the post-2003 Abramovich era.

It's certainly been an eventful 18 months in charge for Lampard, a popular appointment among the supporters despite the fact he had just one season of managerial experience under his belt.

He replace Maurizio Sarri, who led Chelsea to victory in the UEFA Europa League but never looked comfortable at the club or, indeed, in English football or England.

Lampard's legendary status was always going to buy him more time than many who'd come before him - though not much more, as it's transpired - and likewise the fact Chelsea were serving a transfer ban in the summer of his arrival. 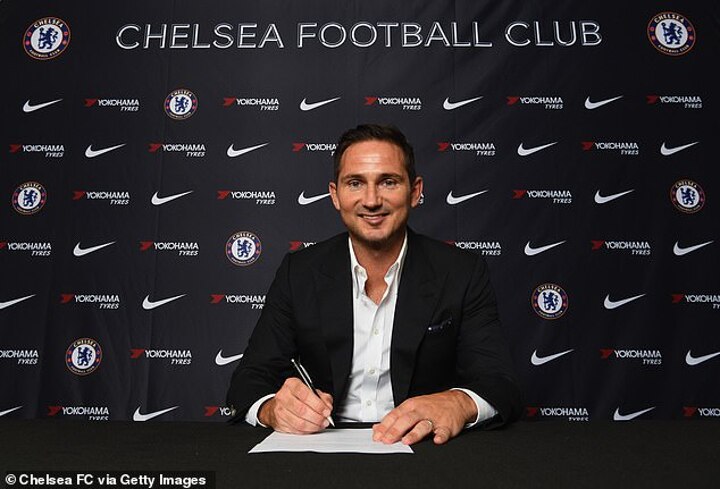 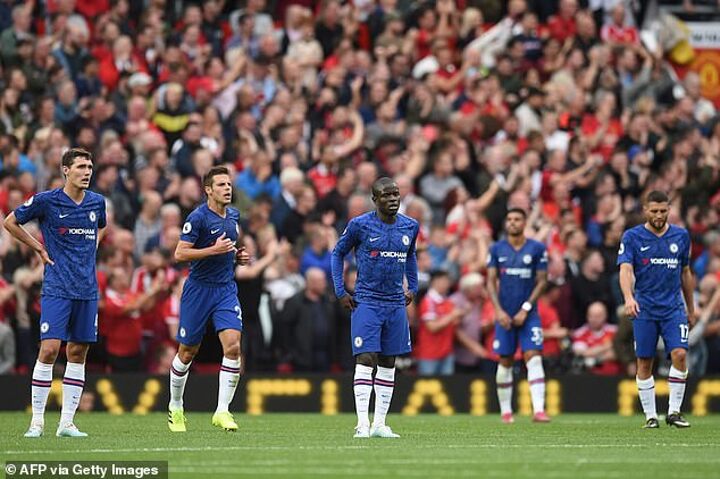 His side were eviscerated on the counter-attack by Manchester United in his first competitive match in charge though that 4-0 defeat at Old Trafford was harsh on Chelsea.

Unable to sign anyone, Lampard placed his trust in graduates of Chelsea's academy such as Tammy Abraham, Mason Mount and Reece James, who repaid that faith.

The team looked very raw at times but found their feet during the autumn when six straight league wins lifted Chelsea into the top four, a status they didn't relinquish all season.

They were never likely to challenge Liverpool at the top, however, but there were definite signs of progress.

Lampard suffered a similar slump in league form in November and December as has been witnessed this season, suffering defeats to Man City, West Ham, Everton, Bournemouth and Southampton in rapid succession. 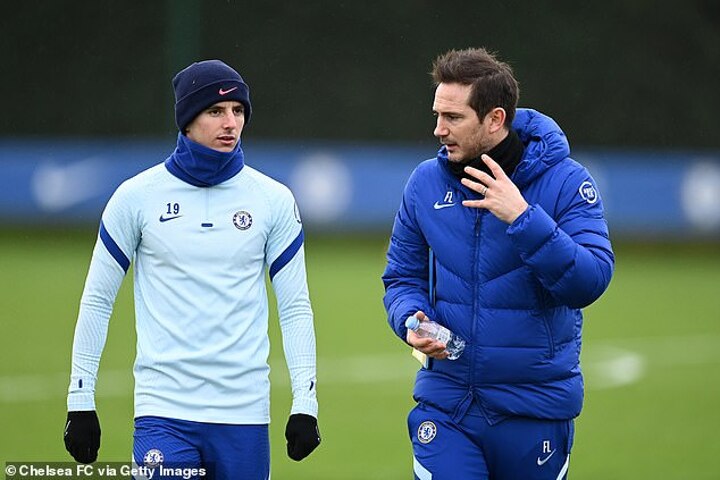 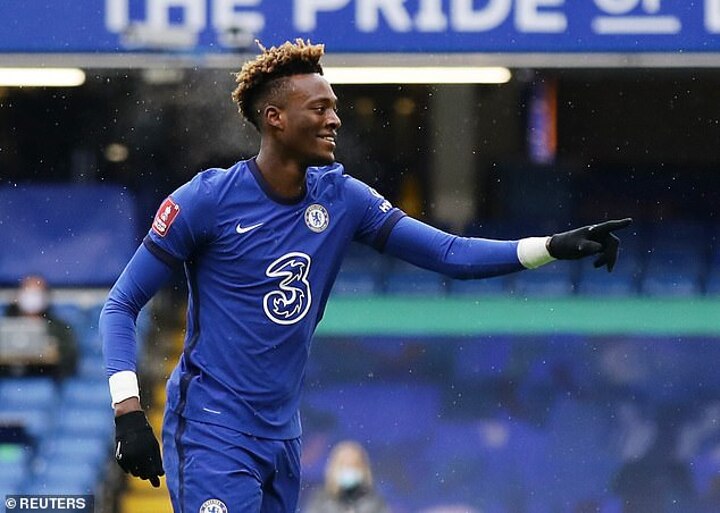 However, it didn't jeopardise their top four chances and Lampard's team bloomed in the Spring, the highlight being a 2-1 home win over Tottenham, completing the double over their rivals.

As it did so often as a Chelsea player, the FA Cup brought comfort to Lampard. They overcame tough tests against Liverpool, Leicester and Manchester United to reach the final.

Having finished second to Valencia on head-to-head record in their Champions League group, Chelsea were handed a daunting assignment against a Bayern Munich juggernaut rolling imperiously towards a Treble.

Thrashed 3-0 at Stamford Bridge and 4-1 in Munich either side of football's three-month coronavirus shutdown, it highlighted just how far Chelsea had fallen from Europe's elite. 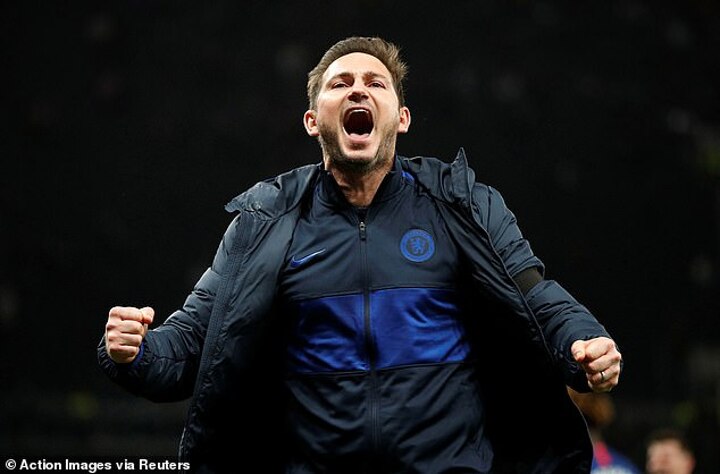 Six wins and three defeats post-restart secured fourth place but a passable season might have become a good one if they'd beaten Arsenal in the FA Cup final.

Despite leading just five minutes in thanks to Christian Pulisic, Chelsea ultimately lost 2-1 to their London rivals in a game completely lacking a sense of occasion at an empty Wembley.

Nonetheless, it represented an encouraging enough first season for Lampard, even more so for his faith in the kids. Abraham ended up as top scorer with 18, while Mount excelled in midfield.

The challenge was continuing their development while assimilating the expensive new arrivals after Abramovich handed Lampard a blank cheque last summer. 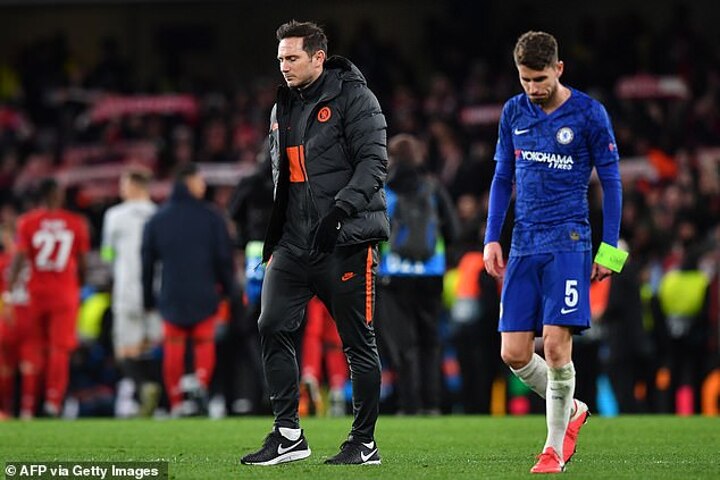 To Lampard's credit, he has still given plenty of opportunities to the youngsters despite such lavish new arrivals but the progress made after this £220m worth of investment was too slow.

Werner was a prolific striker for RB Leipzig in Germany but, after a positive start, has now gone 11 league matches without a goal, netting only against League Two Morecambe in the FA Cup during that time.

Havertz has yet to convince, while Chilwell and Ziyech have drifted in and out of form.

Chelsea were beginning to look like serious title contenders when they embarked on a nine-match unbeaten league run in October and November, as well as serenely progressing through their Champions League group. 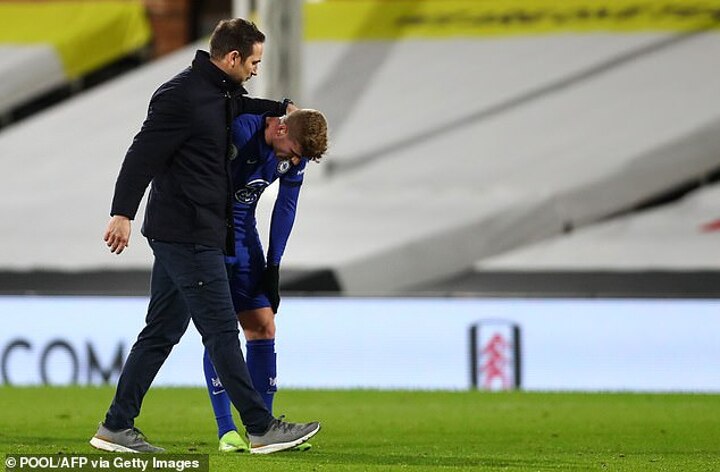 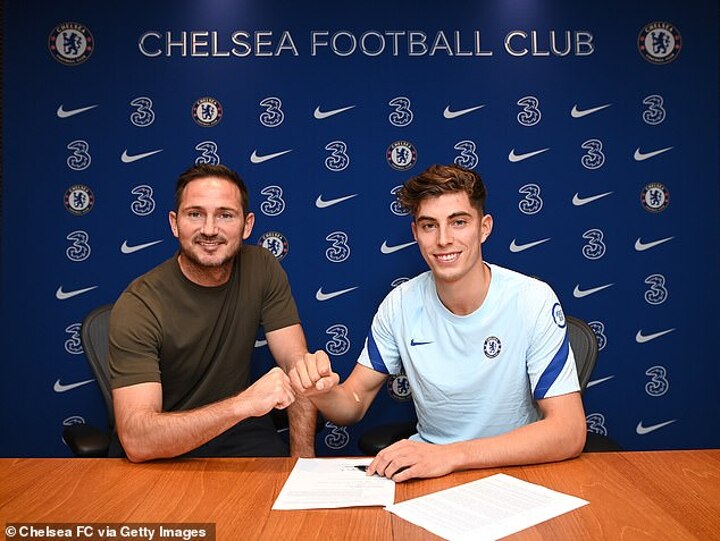 But things entered a downward spiral following the 1-0 loss at Everton on December 12. Chelsea subsequently lost to Wolves, Arsenal, Man City and Leicester, torpedoing any chance of winning the title.

The way City scored three goals in a little over half-an-hour, ripping Chelsea's defence apart time after time, showed how the team had regressed.

Lampard departs with the club sitting in mid-table and, according to the club statement confirming his sacking, there was little confidence he could lead them out their slump after just two wins in eight.

It was clear from his emotional reaction to a question about the 'In Frank We Trust' banner commissioned by supportive fans and hung from the upper tier of The Shed ahead of Sunday's Cup game with Luton how invested Lampard was in his job.

An often animated presence on the touchline, his passion sometimes boiled over. He told Liverpool manager Jurgen Klopp to 'f*** off' and 'sit down' during a touchline spat at Anfield in July. 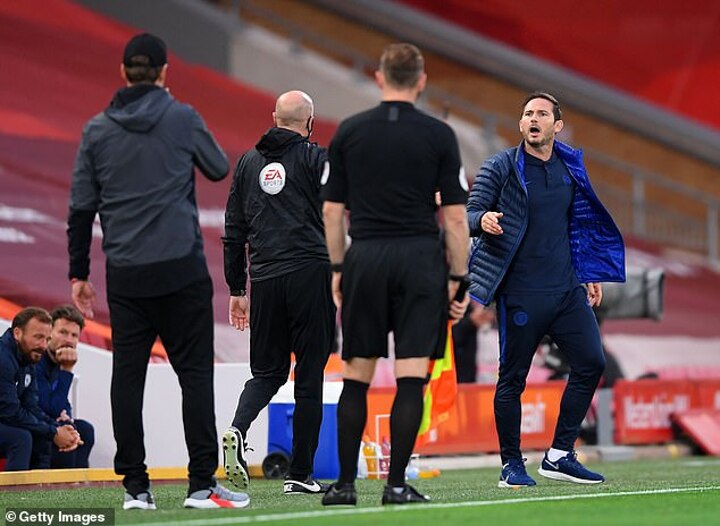 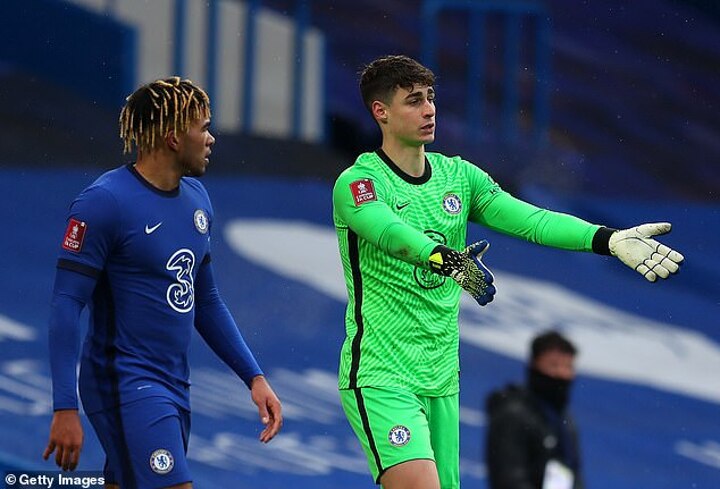 There was a similar confrontation with Spurs boss Jose Mourinho during their Carabao Cup defeat in September.

His steely side was apparent in the way he ruthlessly dropped £72m goalkeeper Kepa Arrizabalaga for Mendy at the start of this season following one error too many.

His treatment of the Spanish keeper, whose confidence looks totally shot, is reportedly one of the reasons Chelsea's hierarchy moved to remove him now.

Lampard also tore into long-serving Marcos Alonso after the defender tried to watch the second-half of Chelsea's 3-3 draw at West Brom from the team bus rather than the stands back in September. Alonso had been hooked after a calamitous first half that saw his side trail 3-0.

So after 18 eventful months, it's so long, farewell and onto the next one with Thomas Tuchel set to become the 15th manager of the Abramovich age.

Lampard, 42, will be hoping his managerial career hasn't already peaked after romanticism came a cropper against cold, hard reality.