We have reached the final weekend of what might be one of the greatest LaLiga Santander seasons of all time and there's still almost everything to play for. 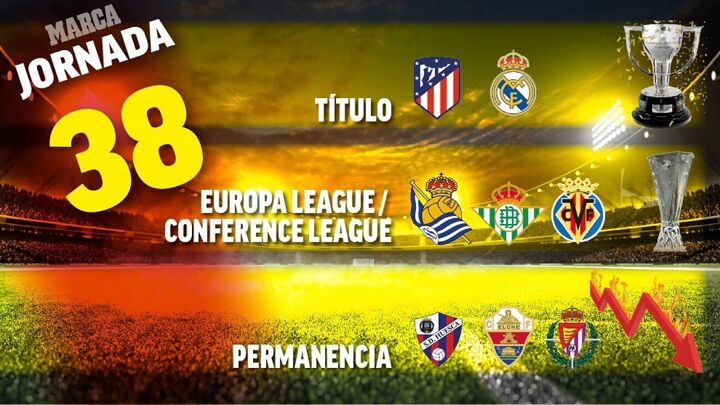 When Saturday's seven games kick off (18:00 CET), the title will be decided over the ensuing 90 minutes, along with the final relegation places and European qualification.

Atletico Madrid and Real Madrid are the two title contenders going into their final matches, while Eibar are the only confirmed relegated team.

Joining Eibar in LaLiga SmartBank next season will be two from Valladolid, Elche and Huesca, with only one being able to save themselves on Saturday.

Then there's the European places, where just one point separates Real Sociedad, Real Betis and Villarreal.

All three will be playing European football next season, but only two will do so in the Europa League, while one will have to settle for the newly created Conference League.

Of course, that could change if Villarreal win the Europa League final next week against Manchester United.

In some of Saturday's fixtures we will see multiple objectives at stake, such as at Zorrilla, where Atleti will be gunning for the title at the home of Valladolid, fighting for survival.

At the Estadio Alfredo Di Stefano, meanwhile, Real Madrid, hoping their city rivals slip up, will have to take care of business against a Villarreal team who will be wanting to guarantee Europa League football for the coming campaign.

Who will be crowned champions?

Atletico (83) will be champions if they beat Valladolid; if they draw or lose, they need Real Madrid not to win.

Real Madrid (81) must win to give themselves a chance, but it will only be enough if Atleti also fail to win.

Who is going down?

Elche (33) need to do better against Athletic than Huesca do against Valencia; if they win, Huesca must draw or lose; if they draw, Huesca must lose.

Huesca (33) will be safe if they win at home against Valencia, but if they lose or draw they will need Elche to do the same, or worse.

Who will qualify for the Europa League and Conference League?

Two of Real Sociedad, Betis and Villarreal will be in the Europa League, while seventh place will qualify for the Conference League, and, curiously, all three are playing away from home on Saturday.

La Real have the advantage of starting Saturday a point ahead of the other two, while both they and Betis can secure Europa League qualification by beating Osasuna and Celta Vigo respectively, regardless of other results.

The Yellow Submarine, who face Real Madrid, are the only ones in this race whose destiny is not entirely in their own hands, but they do have the trump card of the Europa League final to come, which could give them a ticket to the Champions League.

If Unai Emery's men finish seventh but then win the Europa League, Spain will have five teams in next season's Champions League, but none in the innaugural Conference League.

There's so much still at stake, with so many possible permutations, and Saturday promises to be another exciting day in an incredible season of LaLiga Santander football.