Did Guardiola overthink it again? 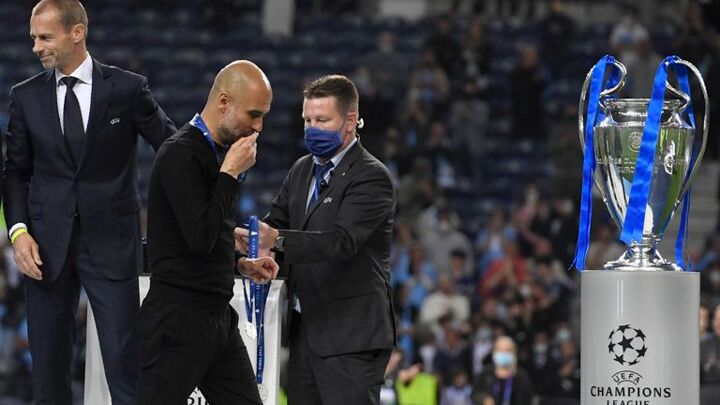 The suggestion that Pep Guardiola overthinks the biggest games has become a trite observation but how can it be avoided after this latest disappointment? Going into the Champions League final as favourites, the Manchester City boss again sprang a surprise.

Tweaks are inevitable. This was more fundamental.

In 60 games this past season, Guardiola had only once opted to go without either Rodri or Fernandinho and that was at home to Olympiakos over six months ago. "Our way is to attack," he explained before kick-off. Edouard Mendy hardly had a shot to save.

Ilkay Gundogan, City's top scorer in the Premier League this season, was forced into a holding role. It did not work. The control that had been such a feature of the team's turnaround during the winter months was absent from the outset, the dangers obvious. 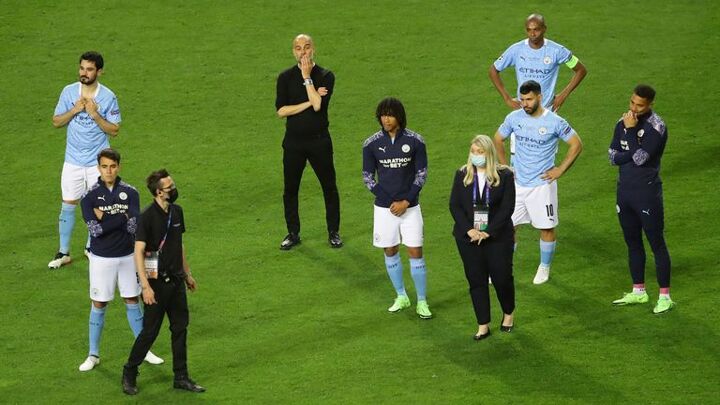 Privately, Guardiola is said to have described Bayern Munich's semi-final defeat by Real Madrid in 2014 as his biggest tactical error. For that game, he twice changed his mind over the formation before the second leg - a game Bayern would go on to lose 4-0 at home.

The mishaps at Manchester City are part of club folklore now. The naivety against Monaco, the chaos against Liverpool and the caution against Tottenham when Kevin De Bruyne was left on the bench. Against Lyon last summer, he went with Rodri and Fernandinho.

Perhaps it was only natural that the solution this time was to play neither.

Chelsea in Porto joins the list, the blow not quite self-inflicted but with Guardiola certainly seen as an accessory. Would it have been better to trust in the system that has served them so well and go with a specialist holding midfielder instead of Raheem Sterling?

Guardiola would have escaped the blame had he done so but that is not in the nature of the most celebrated coach of his generation. His job, his responsibility, is to make a difference. He tried to do that. For the third time in six weeks, Thomas Tuchel had his number.

Ten years and one day have now passed since Guardiola last won the biggest club game in European football. Barcelona were extraordinary that evening at Wembley, delivering a performance that is rightly regarded as one of the greatest that any side has ever produced.

The Guardiola way still works, his processes still churning out some of the best football around and he has the titles to prove it. But for a decade now the very biggest games have refused to bend to his will. The supposed overthinker now has a summer to dwell on it.
Adam Bate

Tears for De Bruyne and Aguero 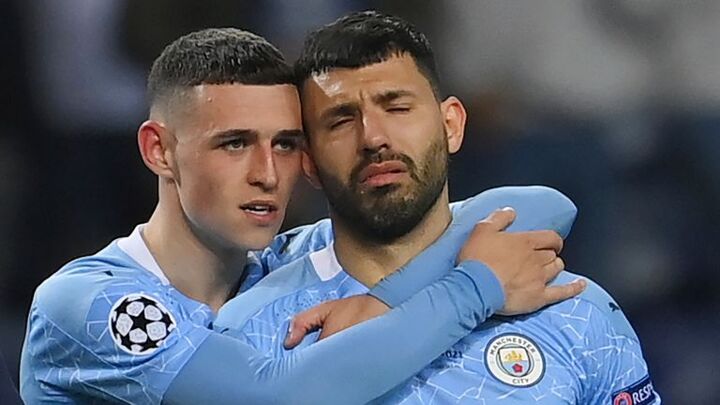 Sergio Aguero stood alone having broken down upon the final whistle at the Estadio do Dragao and he was the sole City player remaining long after his team-mates had collected their runners-up medals and departed, watching on from the mouth of the tunnel as Chelsea continued their celebrations with their supporters.

He had ended his Premier League career in such style, scoring twice against Everton a week ago, but Pep Guardiola elected to field a side without a pivot, and with a false number nine. The system didn't work, with City mustering just one shot on target all night.

In fact, following Kai Havertz's goal in the 42nd minute neither City nor Chelsea managed to land a single shot on target during the rest of the match. Aguero was afforded 20 minutes, including the seven in stoppages, to produce one last stellar moment, when his club needed him most. 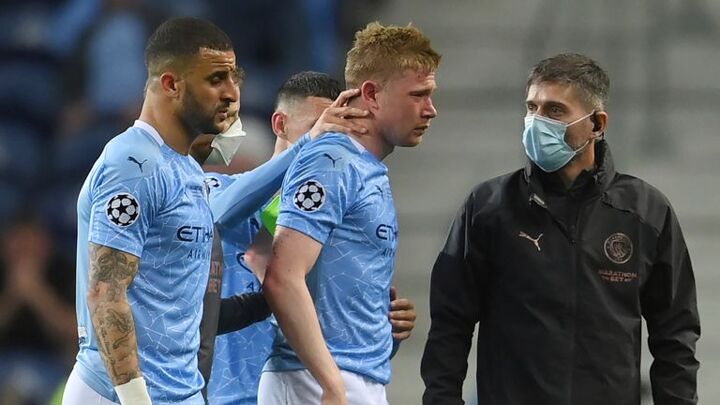 Found in space down the left, his cross was easily claimed by Edouard Mendy, while he was agonisingly close to getting his studs on another from Kyle Walker. He just needed the ball to drop his way but when the one final chance came in City's direction, it fell to Riyad Mahrez with his sliced effort grazing the crossbar.

On the final whistle, Aguero was embraced by Kepa Arrizabalaga as he stood on the edge of the penalty area, then came Ruben Dias to offer further commiserations. This was his 390th and final City appearance, but he was unable to bow out in style and unable to affect the game. Manchester City representatives tried to console him but it was a pointless exercise.

It was a sad end for Aguero and it was a sad end for Kevin De Bruyne, departing with a head injury in the 60th minute. He was handed the captain's armband on the night in the surprise absence of Fernandinho but he was well marshalled by Thomas Tuchel's compact system.

This was a stage befitting of De Bruyne's brilliance, but too often his trademark passes failed to reach the desired target. So often has he run the show, but here he was on the periphery, ill at ease with Guardiola's inclination to find another way of winning.

He lost possession on 14 occasions and was growing increasingly frustrated when a nasty collision with Antonio Rudiger wiped him out of the game. It was cynical from the Germany defender, worthy of a yellow card, and De Bruyne was left requiring medical attention, emerging with a swollen left eye and unable to continue.

He left the field in devastation and sat briefly with an ice pack over the bruised area but departed down the tunnel shortly after Aguero's introduction for further assessment. Chelsea will be a force to be reckoned with next season, emboldened by the confidence winning the Champions League will breed. De Bruyne will hope his time will come again, but for Aguero, there would be no fairy-tale end.
Ben Grounds

James and Chilwell change the shape of England's full-back debate 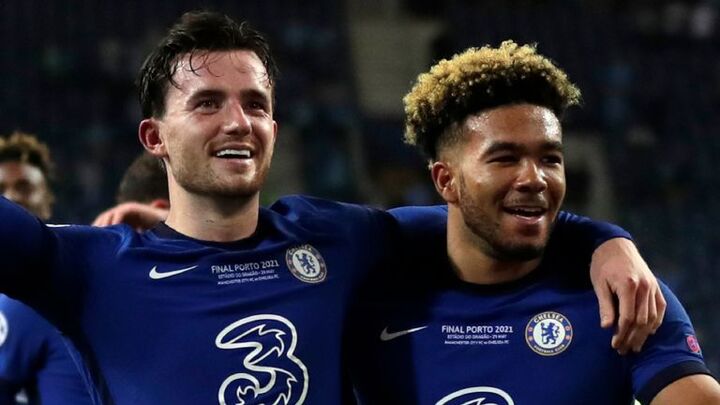 Has Gareth Southgate's squad selection at right-back for the Euros become easier or harder after the Champions League final? The answer is surely a bit of both.

So that's the hard bit.

But the easier angle to conclusively emerge on Saturday night in Porto was the compelling argument that James must, at the very least, be in the squad, if not a certain starter on June 13 against Croatia. On the highest stage possible, the Chelsea youngster rose to a new standard as he nullified and neutered Raheem Sterling. Dare Southgate overlook him now? How can he?

On the opposite flank, Ben Chilwell was every bit as impressive as he did to an in-form Riyad Mahrez what his fellow wing-back had done to an out-of-form Sterling. The key description here in terms of the England debate here could of course be 'wing back', for Luke Shaw and Walker could justifiably be considered safer options as conventional full-backs if that is the route Southgate goes down. But on the night of their lives and of their careers to date, James and Chilwell could have done no more to win the argument.
Pete Gill 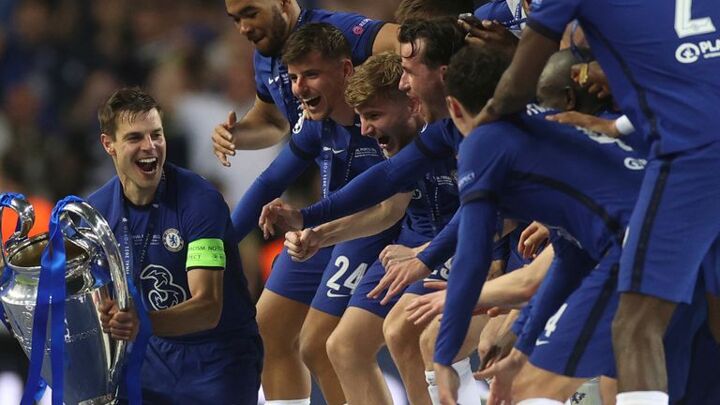 Watching Chelsea repel Manchester City attack after Manchester City attack, it was impossible not to marvel at the defending. Andreas Christensen, a first-half substitute, making a crucial block in the 90th minute. Cesar Azpilicueta defying age at the back. Antonio Rudiger cleared everything that came his way. This is a formidable defensive trio. No wonder Thomas Tuchel has turned things around so quickly with such talent available.

Only then do you remember that the three men started nine Premier League games between them prior to Christmas under Tuchel's predecessor Frank Lampard.

Watching Chelsea carve Manchester City's defence wide open for the only goal of the game, it was easy to wonder why they were such underdogs. The £70m man Kai Havertz timed his run perfectly and had the composure to beat Ederson and slot the ball into the empty net.

Only then do you remember that Havertz spent the early part of the campaign being shuffled from position to position, never really showing the form of which he was capable.

It is Tuchel who has unlocked the quality within this group. It is Tuchel who found a way to transform a team that was languishing in ninth when he was appointed. Qualifying for next season's Champions League was the target. Nobody expected him to win it this season.

Except perhaps for Tuchel. What had been portrayed previously as a project that would require time to gel, needed only the expertise of a world-class coach. The new system was put in place and the players understood their roles in it almost instantly.

It has not always been free-flowing but within five weeks of taking over, Tuchel delivered away wins over Tottenham, Atletico Madrid and Liverpool - all of them coming by the same 1-0 scoreline that would do for Manchester City in Porto. The clues were there.

Chelsea have been here before, of course. Their previous Champions League triumph came under Roberto Di Matteo, a man who was appointed even later into the season than Tuchel.

But the Italian oversaw a wild ride that seemed to owe plenty to fate and fortune as well as defensive doggedness. This Chelsea team share that resilience but it has been much more controlled, much more repeatable. Inevitable, even? Only after Thomas Tuchel arrived.
Adam Bate

Havertz proves his worth to Chelsea 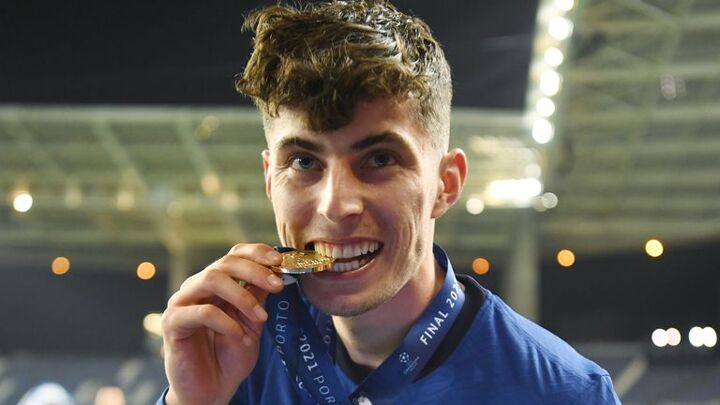 It's been a long and difficult first season at Chelsea for Kai Havertz, but that will now all be water under the bridge after his goal secured the Blues their second Champions League success.

Following a £75m move from Bayer Leverkusen, the 21-year-old was surrounded by plenty of hype and excitement when he arrived in west London, but he has only really shown glimpses of his undoubted talent.

However, since Thomas Tuchel's arrival his form has picked up and he has started to show what all the hype was really about.

It came to a head in Porto, where Havertz was superb and he came up with the decisive moment, keeping his cool to gather Mason Mount's pass, round Ederson and roll the ball into an empty net.

It's a moment that will have already repaid his massive transfer fee in the eyes of the Chelsea supporters and the club's owner Roman Abramovich, but it could also be the platform for the German to really kick on next season.

Described as the "future of the club" by Mateo Kovacic and a "superstar" by Cesar Azpilicueta, his time may well be here and now as he looks to kick on and help Chelsea to even more silverware next season.
Oli Yew