Union Berlin fans would be forgiven for thinking they're in a pleasant dream. 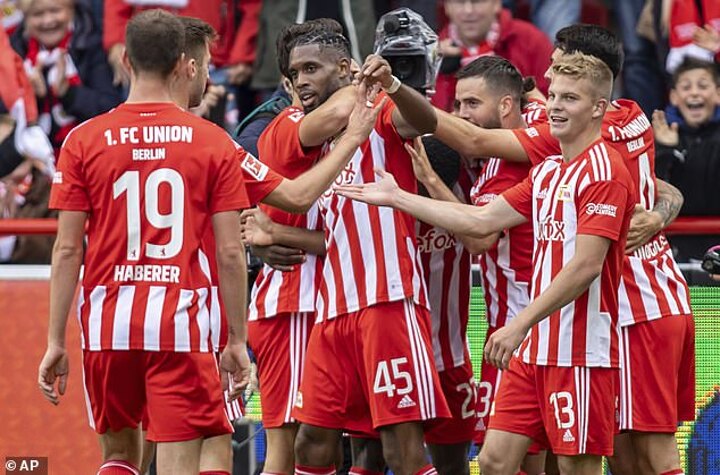 Their team has reached the first international break of the campaign sitting, against every expectation, top of the Bundesliga table.

The only team in Germany's top-flight to still be undefeated, they're two points ahead of Borussia Dortmund.

As for Bayern Munich, German champions every year for the past decade? Pah, they're only fifth. 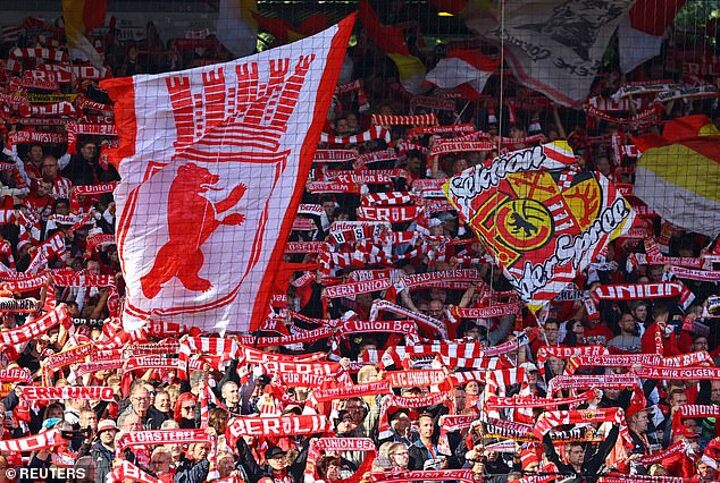 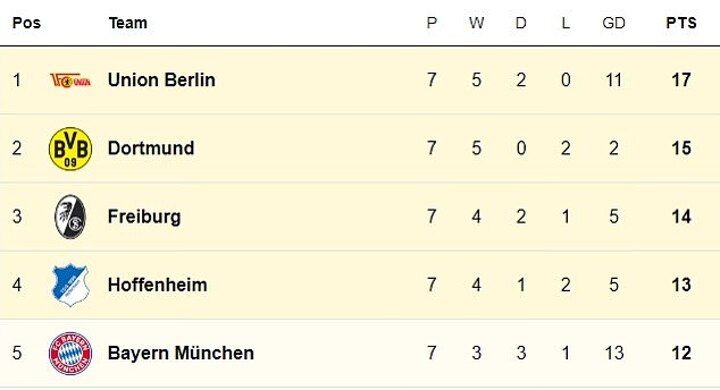 Who knows whether it will last but the faithful of Die Eisernen ('The Iron Ones') who have followed the team through thin and thinner down the years are determined to savour the moment.

They went top of the Bundesliga for the first time in their history when they won 1-0 at Cologne on September 11. That leadership position was duly cemented with a 2-0 home victory over Wolfsburg last weekend.

Other wins have come against city rivals Hertha Berlin, 3-1 on the opening weekend, RB Leipzig and Schalke, who were battered 6-1 on their own patch in late August.

A few days later, Union showed their mettle yet again by holding Bayern to a 1-1 draw. Everything seems to be going right for Urs Fischer and his players, who are proving a real thorn in the side of German football's establishment.

And in so many ways, that suits an upstart, anti-establishment club like Union down to a tee. 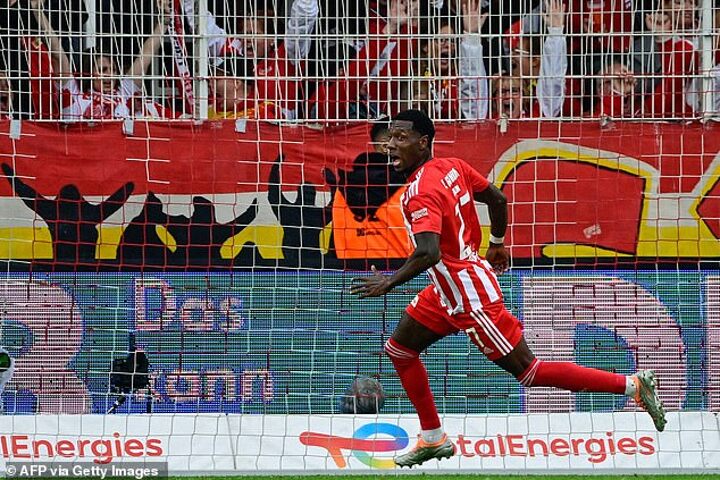 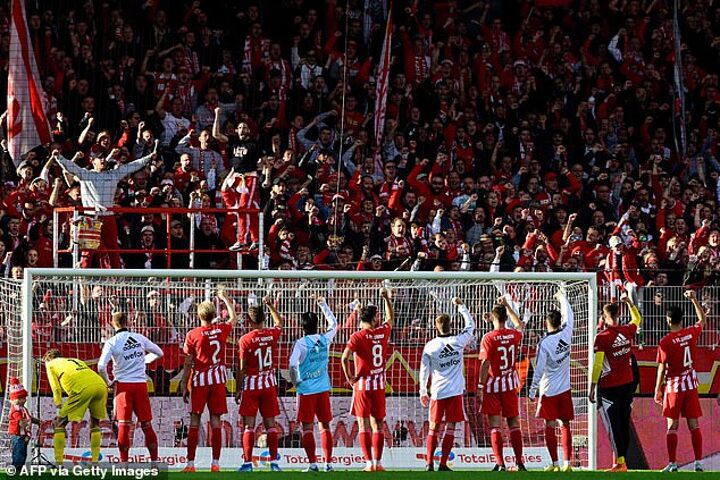 They have never conformed and the stories of fans shouting dissent against the Stasi from the terraces during the days before reunification, when their idiosyncratic Stadion An der Alten Forsterei lay beyond the Iron Curtain, are well known now.

Likewise, there are the tales of Union fans literally bleeding to save their impoverished club by donating blood and turning up with their toolkits to repair the ground in another of those semi-regular brushes with extinction.

Union played fourth-tier football as recently as 2006 and it required a decade in the 2. Bundesliga to crack promotion into the top division for the first time.

Then those loyal supporters missed a lot of their first two Bundesliga campaigns because of Covid-19, but the progress on the pitch has been unmistakable.

They defied relegation predictions to finish 11th in 2019-20 and subsequently came 7th and 5th, playing in the Europa Conference League and then the Europa League.

If they carry on like this, Union will enjoy their first taste of Champions League football next season and that truly would be ridiculous.

It's nose-bleed territory for a club that were perennial no-hopers for decades and the pace of change must be dizzying for those who've witnessed it all first-hand.

But a major concern is the effective 'gentrification' of the club - at what point does this unexpected success take them too far into the football mainstream and erode that rebellious streak that is their main appeal? 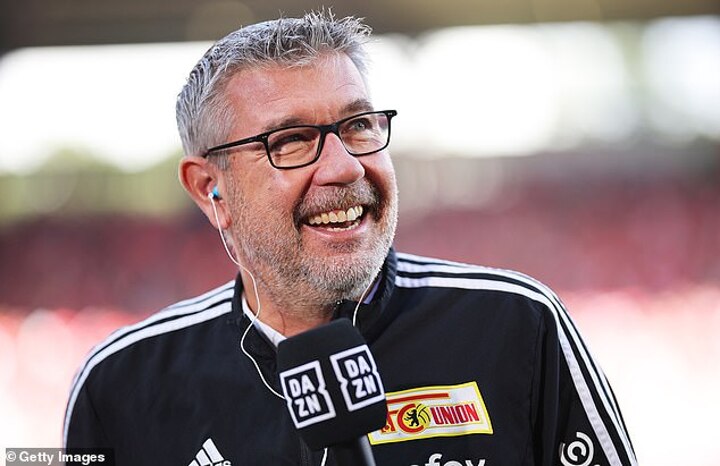 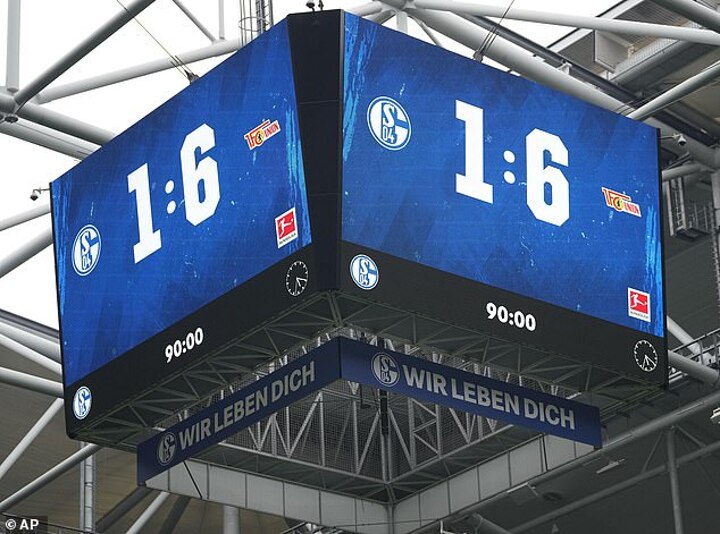 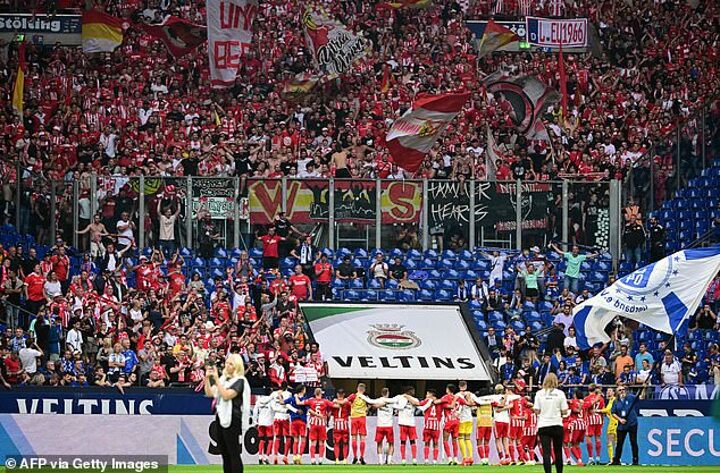 That theme is explored in detail in the recently-released book 'Scheisse! [S***] We're going up!' by the German-based journalist Kit Holden, which is the first English-language work about Union, their history and culture.

Holden's fascinating book draws parallels between the changing face of Berlin as a city post-reunification with the current state of flux at Union.

Great swathes of Berlin have received huge investment over the last 30 years, with shiny apartments and office blocks springing up everywhere, but with the consequence that locals are driven out of beloved neighbourhoods by spiralling house prices.

Likewise at Union, where their 'hipster club' reputation has seen the hardcore who've been standing on the crumbling terraces for decades increasingly joined by day-trippers and tourists.

The book points out that in 2010, as a newly-promoted second division club, Union had 6,500 members but that have risen exponentially to almost 40,000 today. Incidentally, the stadium holds just over 22,000 fans. 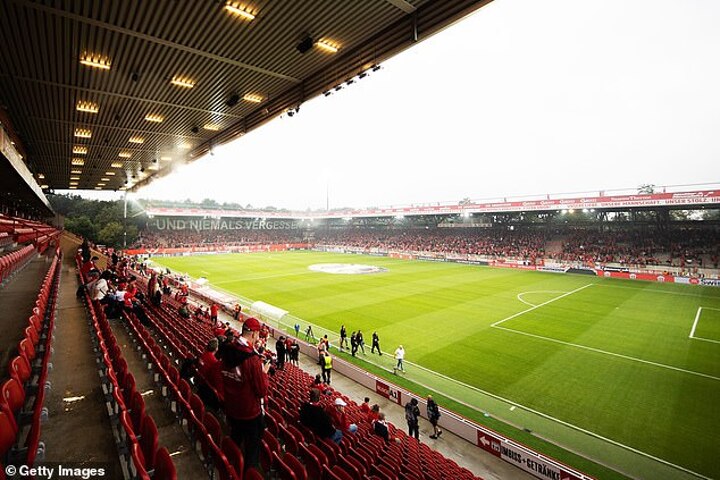 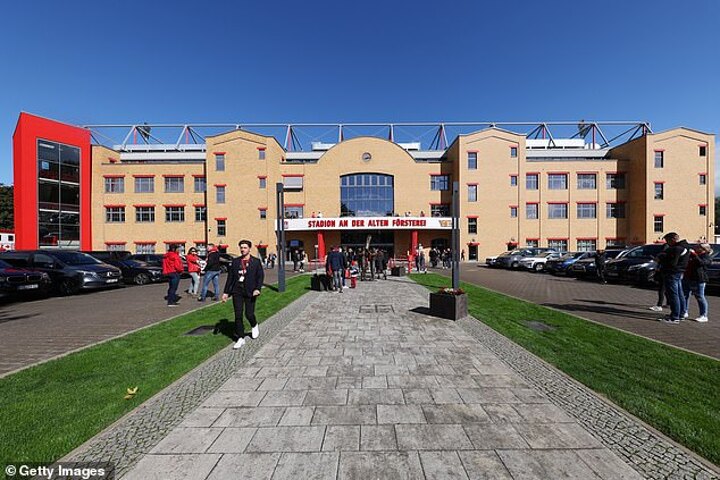 And with that comes the temptation to expand commercially and chase greater brand exposure overseas, with the risk of selling a bit of your soul.

Their current form will only increase that angst but Union should enjoy the moment too. These days may never be seen again.

Swiss coach Fischer, 56, has lifted Union to unprecedented heights since arriving in 2018 and his tactics make them incredibly awkward to play against.

His favoured 3-5-2 formation allows them to play directly as opposed to placing an accent on possession. They usually only see about 40 per cent of the ball but they're ruthless with it.

One of the major tasks over the summer was replacing the 15 league goals scored by Taiwo Awoniyi last season after the Nigerian moved to Nottingham Forest for £17.5million. 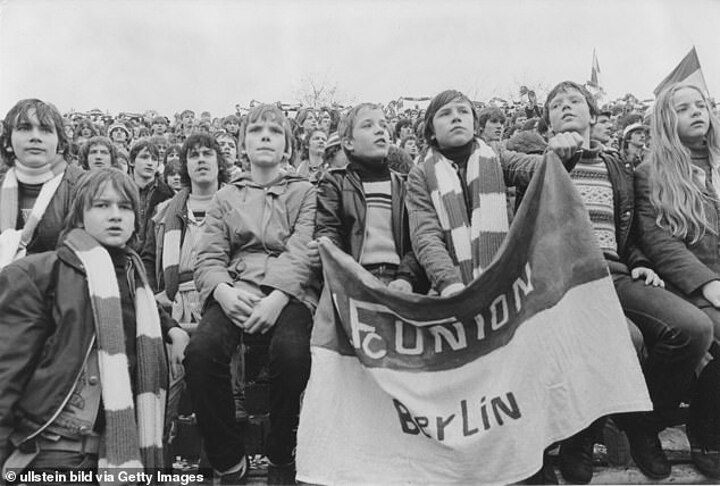 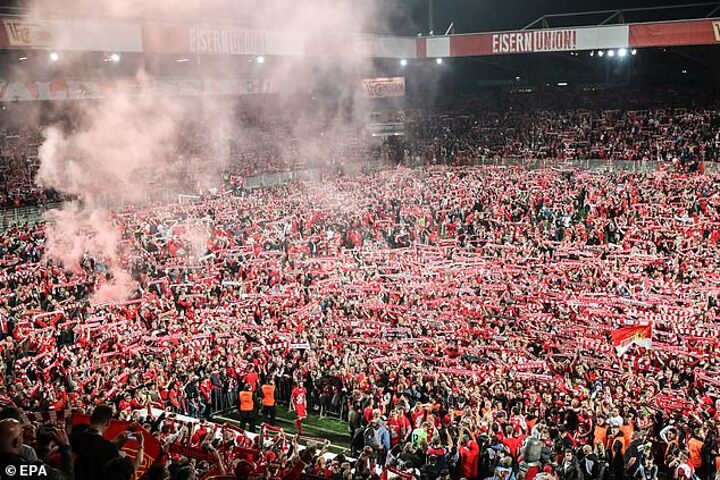 Fischer signed the 6ft 3in United States international Jordan Pefok from Swiss club Young Boys to maintain a physical edge and he has three Bundesliga goals in six games so far.

The American is also forming a strong chemistry in attack with Dutch-born Suriname international Sheraldo Becker, who has six in seven.

Both are willing to make runs into the channels to chase down the long balls played from deep in their direction, the idea being that any opposition press is bypassed. It has worked a treat so far.

Of course, to counter so effectively requires players who can pick out an accurate pass. Robin Knoche, one of the three in defence, is adept at this seeking out the advanced wing-backs Christopher Trimmel and Julian Ryerson. 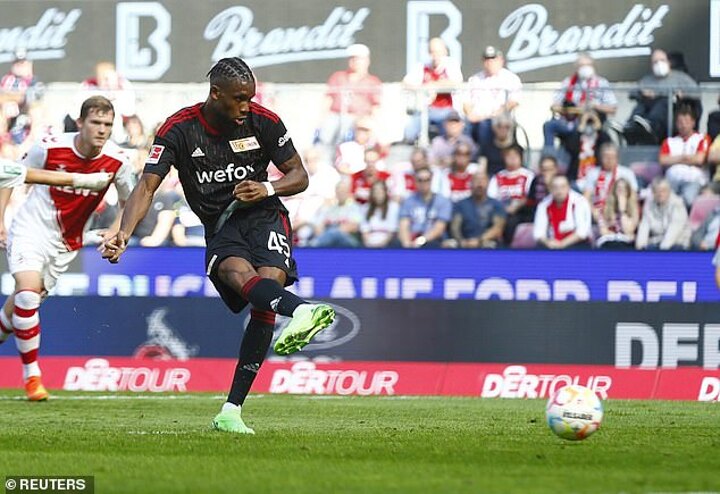 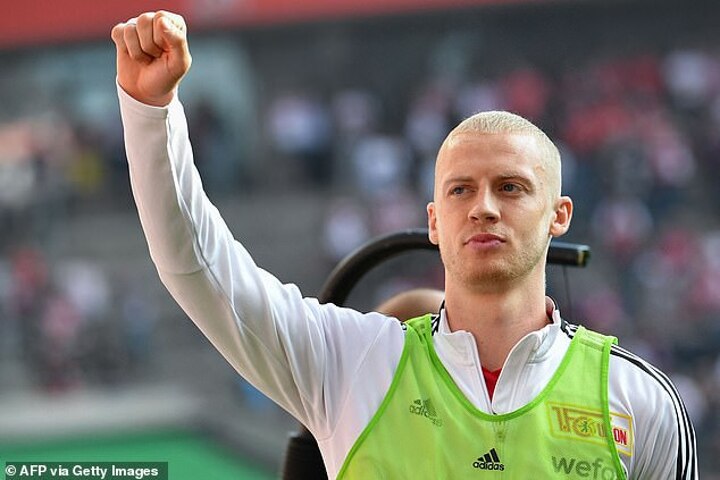 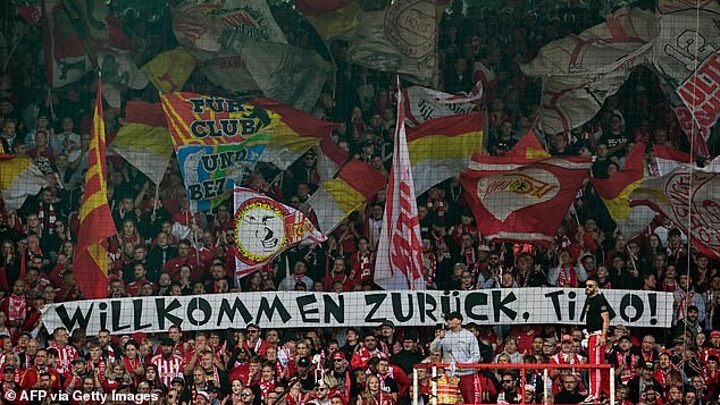 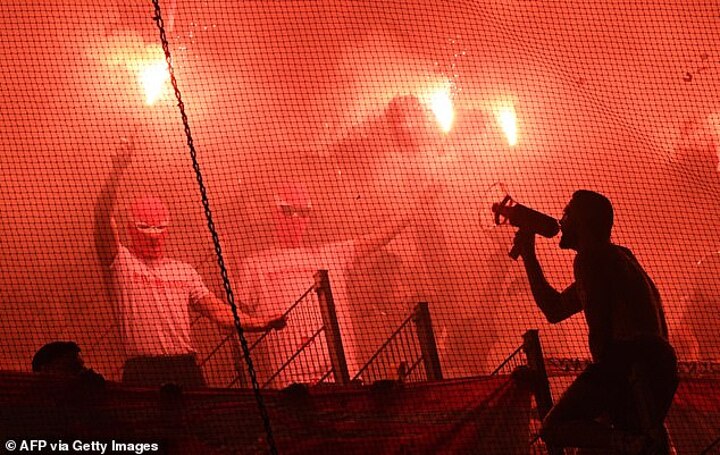 There has also been the heart-warming return of defender Timo Baumgartl, 26, who has beaten testicular cancer following surgery to remove a tumour and a course of chemotherapy over the summer. 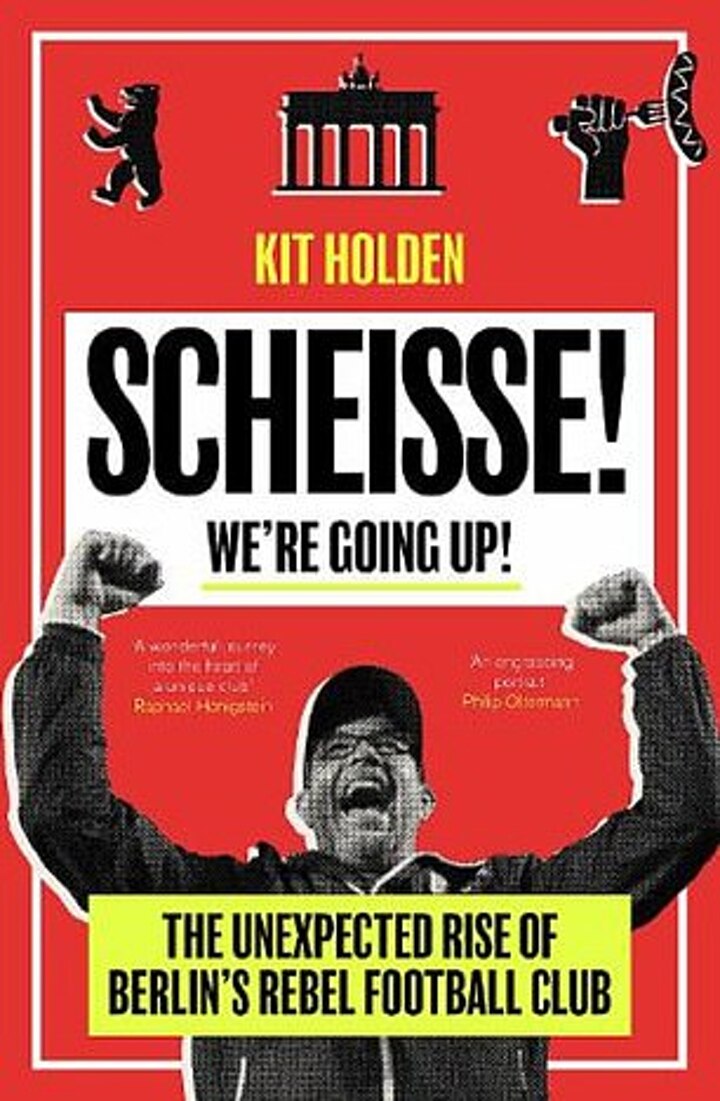 'It's an overwhelming feeling to say you're going from the hospital to the football pitch,' said Baumgartl after he returned to the starting line-up against Wolfsburg and helped his team to a clean sheet.

While Union are thriving in the Bundesliga, they have lost their first two Europa League group fixtures - both 1-0, to Union Saint-Gilloise and Braga - but if they exit early, it looks like they'll be back in Europe soon enough.

Those European away days are simply a nice bonus for the fans, who made their presence felt with a huge pyro-show in Portugal last week.

Quite where all this new-found success leads remains to be seen. It must be a weird sensation for those indoctrinated in Union over many years and decades but they won't want to wake up quite yet.