The quip Bill Shankly once made to dismiss questions about Liverpool's form today rings true: here they are having problems at the top of the league. 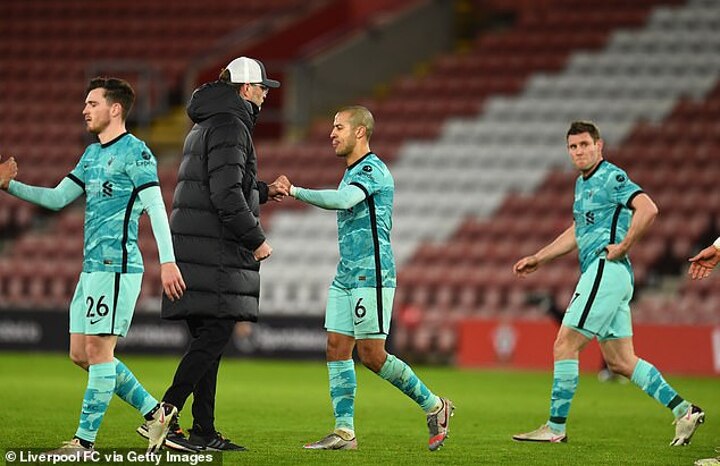 Three lacklustre displays and two points from nine has given Jurgen Klopp much to consider in week one of the new year. Liverpool, suddenly, look vulnerable and the sombre mood among the players on the flight back from Southampton reflected the recognition that standards have dropped.

A huge fight beckons for last season's champions and if they are going to retain their title, Klopp needs to find solutions. Sportsmail analyses the key issues that must be addressed for Liverpool to regather their momentum.

Fabinho, the outstanding holding midfielder, has performed valiantly to fill in for Virgil van Dijk but Liverpool would be so much more effective with the Brazilian shielding two central defenders.

It was the same with Jordan Henderson at St Mary's: take Liverpool's captain out of the engine room and Liverpool, for some reason, don't have the same aggression; Henderson also missed the trip to Aston Villa and look what happened.

With Joel Matip being brittle and youngsters Rhys Williams and Nat Phillips still so raw, it is crying out for Liverpool to buy a central defender but any potential target would have a huge premium on his fee.

Loan deals will not be considered. Finding the right permanent target, however, is going to be a challenge for Michael Edwards, Liverpool's sporting director, and his scouts. 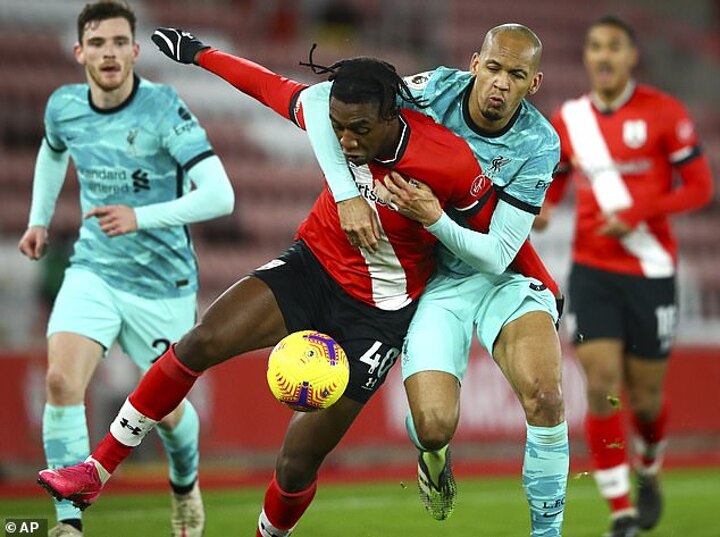 To talk about the defence, it is impossible to leave out Van Dijk and Joe Gomez. The freak nature in which both players sustained their season-wrecking knee injuries has cast a shadow over the squad.

Both players are well into their rehabilitation programmes but whatever lingering frustration the squad feels needs to be put to one side as no mileage can be gained from stewing on the past. 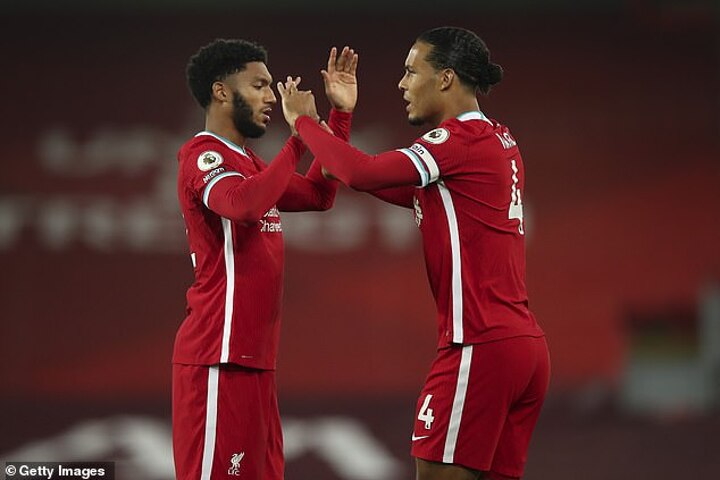 Much was made of the fact Trent Alexander-Arnold gave the ball away 38 times against Southampton. It is an eye-catching statistic but the most worrying aspect of the right back's performance was his role in the Danny Ings goal.

He should have cleared James Ward-Prowse's clipped free-kick and he currently has questions to answer about his defensive capabilities. Alexander-Arnold has enjoyed one steady upward curve over the last four years but this is his first dip.

It would be unfair to say the England right back, substituted in two of his last six performances, is the only player out of sorts. Take Roberto Firmino: when he plays well, the team plays well but he, too, has struggled for consistency.

These numbers show how their influence has dropped. Between them last season, they created 27 goals. Alexander-Arnold (15 assists) created a goal every 266 minutes, Firmino (12) did so every 326 minutes. Now it is 392 minutes and 548 minutes respectively and they have assisted just seven goals. 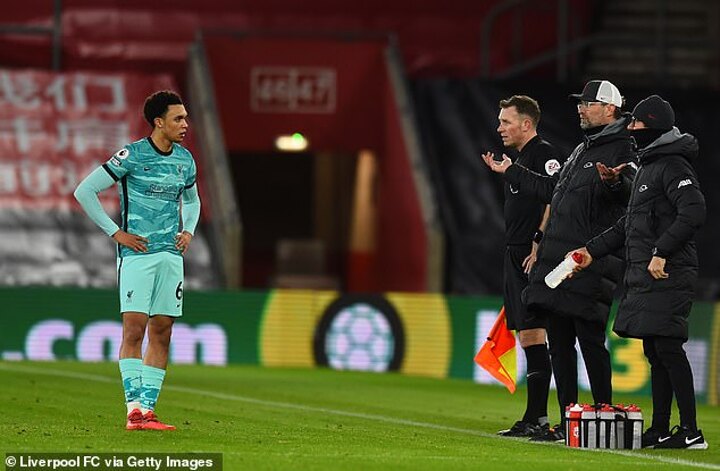 WHERE IS MO'S MOJO?

Since giving an unexpected interview to Spanish publication AS, Mohamed Salah's performances have been, at best, enigmatic. Those who work with him say there has been no change in his attitude and he hasn't given any kind of problem in training.

There is no disguising the fact, however, that he looked irritable against West Brom, Newcastle and Southampton and has squandered chances he usually laps up. Whatever Salah's reason for speaking to AS, he has simply ensured there is now an extra level of scrutiny on his form. 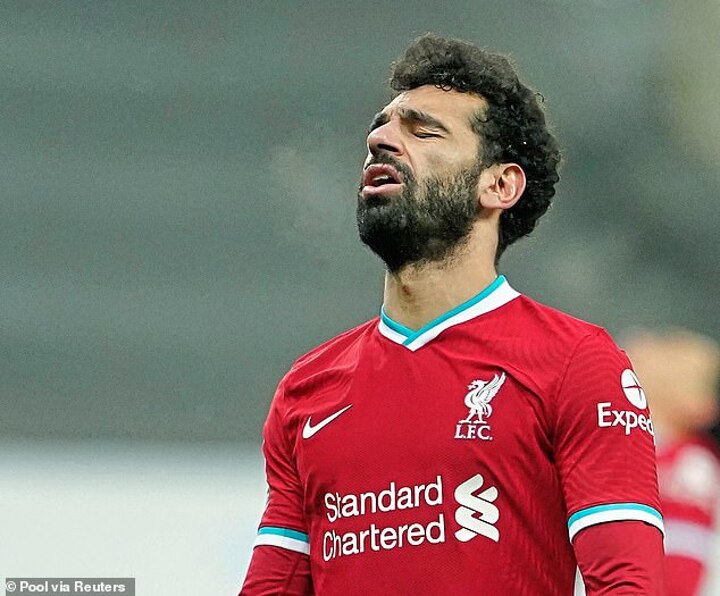 It takes something out of the ordinary for Klopp to even suggest in public he is unhappy with his squad. He protects his players, takes umbrage at negative questions and criticism is applied behind closed doors. His words at St Mary's, then, were of great significance.

'I know they are great guys, super boys, fantastic football players, but (here) they were not good,' said Klopp. 'If I think they should have done better then I get angry, not for long, but I get angry. They know that.

'Just because they won something in the past, doesn't mean you are always like this (he puts his thumbs up). We don't have to make it bigger than it is, but we didn't win the last three games. That's all our fault, mainly my fault, but the boys had a hand as well. We have to change.'

Liverpool's players were off on Tuesday but there will be no warm welcome when they return to training on Wednesday. The running, pressing and fighting that has become his team's trademark has been absent in run-of-the-mill fixtures. Klopp won't stand for it any longer. 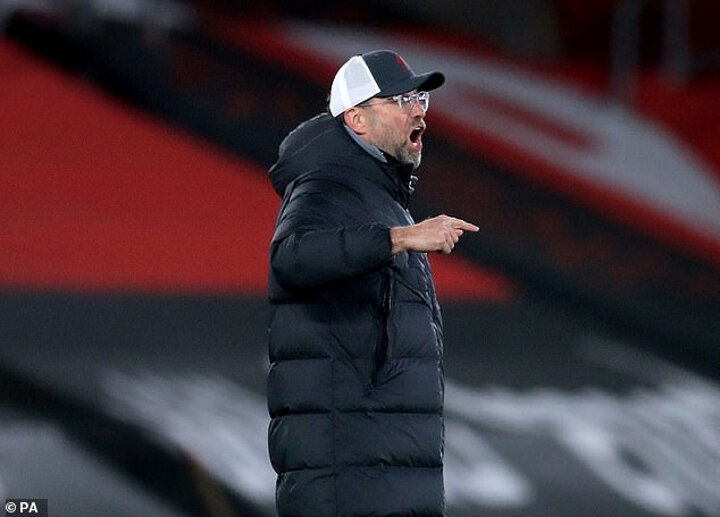