Now that he's coach of Barcelona, Xavi Hernandez has a list of objectives as long as his arm, one of which is to ensure that city rivals Espanyol don't finish ahead of their Camp Nou rivals for the first time in 79 years. 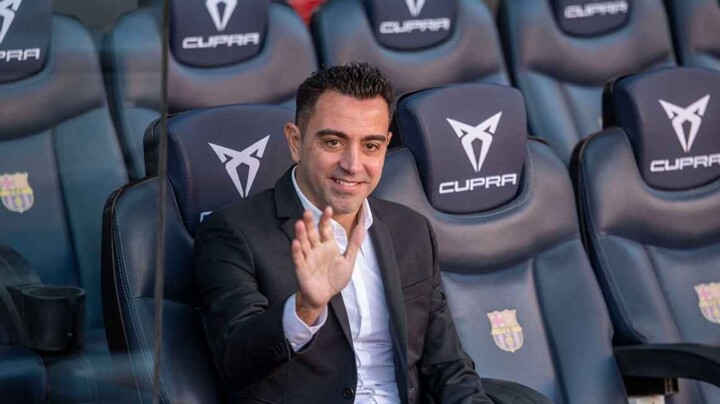 The first building block comes this Saturday, when the 41-year-old will have his home debut as the manager of the club he loves, marked by the intensity of a derby match. As a footballer -- no, strike that: as a genius midfielder who's in the argument to be the best player Spain ever produced -- Xavi's record against Los Periquitos was little short of amazing. He only played one club rival (Real Madrid) more often than Espanyol, and of the 36 times he played in the "Derbi" of Barcelona, he won 25 and lost only twice.

Not once in the 17 seasons that this dyed-in-the-wool Barcelona supporter with magic in his boots -- if he'd been born with lead in his boots, he'd still have been in the Camp Nou every two weeks roaring on his Blaugrana heroes -- was there really any chance of being embarrassed by Espanyol finishing ahead of Barcelona in LaLiga. The closest they came was in 2005 when there were only four places separating the two Catalan sides; the context behind it was that Xavi, Andres Iniesta, Ronaldinho, Deco, Samuel Eto'o, Lionel Messi & Co. won the title while Miguel Angel Lotina's Espanyol, boasting Dani Jarque, Ivan De La Pena and Raul Tamudo, finished an out-of-character fifth... but still 23 chunky points behind the champions.

To set the scene ahead of Saturday's extremely testing home debut -- and you wouldn't be foolish to speculate that Espanyol can see opportunity beckoning -- it's worth knowing that the last time the blue-and-white half of the city finished ahead of the Blaugrana in LaLiga, World War II was still three years away from its conclusion. The other unwanted record is that the last time Espanyol won at Camp Nou, it was February 2009 -- there were some lessons for the visiting coach this Saturday, Vicente Moreno, but more of that later.

Several things make Saturday night's game a fascinating, must-see contest, only one of which is being witness to the start of Xavi's first coaching gig in LaLiga. (The beginning of what many, me included, think can be a very special managerial career.) The other elements making their "Derbi" more alluring than usual are, it's fair to say, less glowingly positive for Barcelona.

Not only do Barca have a debilitating injury list, but Xavi won't be fully sure of which of his injured and "doubtful" players are 100 percent match-fit until pretty close to kick-off. Some key figures won't make it. Worse still is the fact that on the opposing bench there's someone who looks like he can become one of the heavyweights of Spanish coaching over the next decade and beyond. 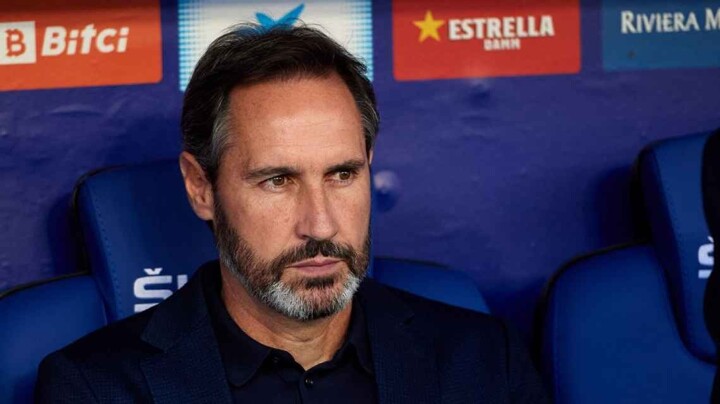 As a footballer, not only was Vicente Moreno (with all due respect) not in Xavi's league -- they weren't in the same stratosphere. The only time they met as opposing midfielders, very briefly, was when a Xavi-inspired Barcelona, in the midst of a three-trophy season, won a pitched battle against Xerez at Camp Nou in April 2010. That day, on as a sub for about half an hour when it was already 3-1 to the home side, Moreno was one of the nine bookings and two red cards as Xerez tried to bully a pretty thrilling Barca side out of its rhythm, to little effect. But for those who like to predict what might happen in big, highly-anticipated matches, there may be a theme here.

Taking the Xerez idea -- bully, kick, shove -- you can link back to the last time Espanyol won at Camp Nou.

Back then in 2009, Los Periquitos had just done what Barcelona have copied, appointing a young, former player/hero and asking him to save everyone's bacon. Instead of Xavi in 2021, back then it was Mauricio Pochettino -- the Argentinian had been a darling of the Espanyol fans across nearly 300 matches, and after spending apprentice time coaching in the club's youth system, he took over with Espanyol rock-bottom of the table and with a game at Camp Nou top of his agenda.

Espanyol went to face Pep Guardiola's Treble-chasing Barcelona -- they'd succeed in that trophy hat-trick later that year -- fully kitted out to spring a major surprise. Metaphorically, they had cutlass and shield at the ready. But let there be no doubt at all that Espanyol played with verve and clinical efficiency (Ivan De La Pena scored twice), or that they performed with total self-confidence until the 2-1 away win was secured. But to use the euphemism "robust" would be to rob their performance of the street-fighting element that made the difference.

Espanyol bullied Barcelona all over the pitch. That night, the teams shared 13 yellow cards and Seydou Keita was sent off. It was ultra-bruising, but Espanyol won, and by the end of the season they finished a genuinely remarkable 10th in LaLiga, having been bottom when "Poch" took over.

Whether Moreno thinks that the idea of spoiling Xavi's debut goes better with a very robust footballing and physical display against a young, wobbly, too-easily-tired Barcelona side, especially just after a long international break, remains to be seen. But nobody should be too surprised if so. What's rather more threatening, you'd have to admit, is how long a shrewd, well-prepared and ambitious guy like Moreno has had to prepare for this test. 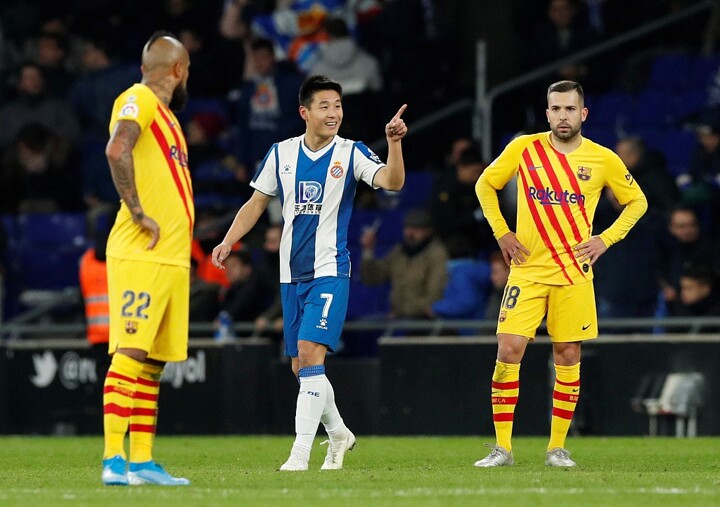 Moreno would be quick to admit how thorough (you might say obsessive) he is about working out how best his team, flourishing nicely in 11th on the same points as the team Xavi has inherited, can beat the big guns. Every single working day, he's out of the house at 7 a.m., in work about 30 minutes later, and his staff will tell you, keeping any weariness well-hidden, that the norm is a 12-13 hour day at the Ciutat Esportiva Dani Jarque, Espanyol's emotively named training facilities.

"If the day has 24 hours, I'd like to dedicate 25 of them to coaching, preparing, watching videos -- even though as you get older, you at least try to impose a sensible timetable on your week" is one of Moreno's recent admissions. "Any day when the players have time off [as they have on a couple of occasions this international break] is a vital component in my work because it's when I get the most time to watch tapes of the rival, to deduce what kind of training sessions I want to lay on for the week building up to the match, and how I want us to play." 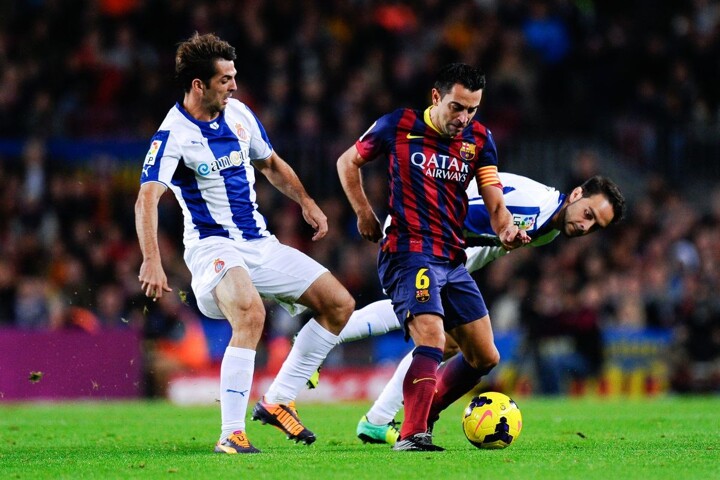 This means that by the time you read this column, Moreno has already viewed sufficient "edits" of Barcelona material, he'll have gobbled up the details of their second-half collapse at Celta Vigo a fortnight ago, and he'll have attempted to devise a game-plan as daring -- and successful -- as he and Espanyol used to beat Real Madrid last month.

"Last season, in coming up from the Segundo, we had a really clearly defined objective: promotion," said Moreno recently. "This year, it's a bit harder to be crystal clear about our new objectives. The wins we achieve will start to tell us how far we can go, but we won't be putting any limits on our ambitions just yet.

"The way things are going, with good performances and more people coming to watch us in our stadium, we've got a unique opportunity to keep on producing the level we showed against Real Madrid. One thing for sure is that if we keep performing, more fans will get behind us and if we mix that with the project the club is planning, we can become an important LaLiga club in the coming years."

Much is at stake for Barcelona and their new coach on Saturday; it's equally a huge night for Vicente Moreno, for his ambitious plans and for the chance to shred a couple of unwanted historical records attached to the Catalan "Derbi." Buy your snacks, put the phone on silent, pull up your chairs, sit back and enjoy. The Catalan 'Derbi' is going to be delicious.