Barcelona have reportedly put a staggering 18 players on the transfer list as they look to reduce their mountainous debt. 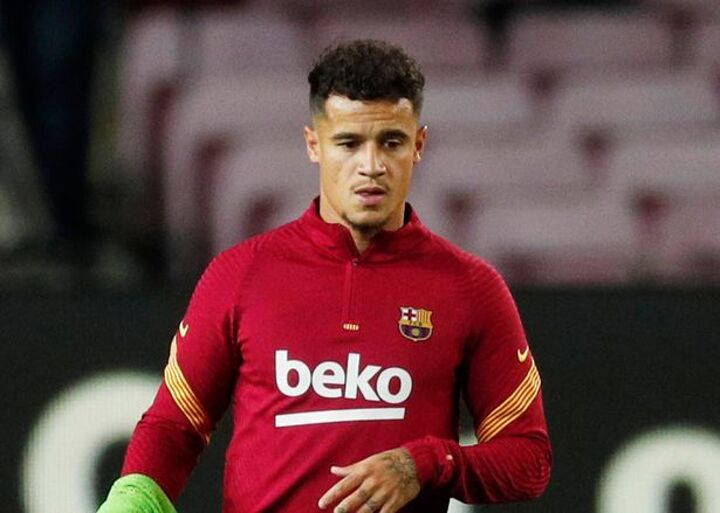 The Spanish club are desperate to slash costs with more than £862million outstanding and their wage bill only increasing following new arrivals, with further signings expected.

President Joan Laporta has been conducting an internal audit of the club's finances and now wants to offload a number of top stars to help get their books in order.

Philippe Coutinho is prime candidate to be sold, with Barca chiefs running out of patience with the Brazilian, while Antoine Griezmann also represents their best chance of attracting a significant cash sum.

Striking a deal for either player could prove tricky in the current market, though, with Coutinho still valued at around £50m by Barca, with Griezmann's price tag slightly higher.

Those on big wage packets are also under consideration, particularly Sergio Busquets, who is one of the top earners at the Nou Camp.

According to the report from  Goal , Laporta is set to hold discussions with the likes of Busquets over taking a wage cut.

Jordi Alba and Clement Lenglet also come into that category, along with Sergi Roberto, who has been linked with a switch to Manchester City.

It is the two new acquisitions from City - Sergio Aguero and Eric Garcia - that have increased the need for a quick-fire sale.

Memphis Depay is also expected to join on a free transfer from Lyon on a considerably high salary.

Having seemingly lost out on signing Georginio Wijnaldum due to PSG stumping their offer, Barca chiefs are keen not to be left in a similar position with any of their other targets.

Savings can be made by moving on Samuel Umtiti, Junior Firpo, Martin Braithwaite and Matheus Fernandes; who are all likely to attract bidders for reasonable fees.

Miralem Pjanic doesn't appear to be part of Ronald Koeman's plans and Barcelona could boost their bank balance by selling him, but finding a buyer might be more difficult given his value of £70million only last summer.

There are several other players who could also be made available if enquiries are made.

Ousmane Dembele is yet to agree on a contract extension and will be touted to potential suitors if he does not pen fresh terms.

Barca fear losing him for nothing in 2022 and are willing to do business at around €50million (£43m) this summer if Dembele does not want to play ball.

Tying Lionel Messi down to a new contact remains Barcelona's priority but he is expected to sign an extension to remain at the Nou Camp.