UEFA named Kevin de Bruyne as the Player of the Match in City's 2-1 defeat of Borussia Dortmund in the Champions League on Wednesday, but for once the Belgian probably didn't deserve it. 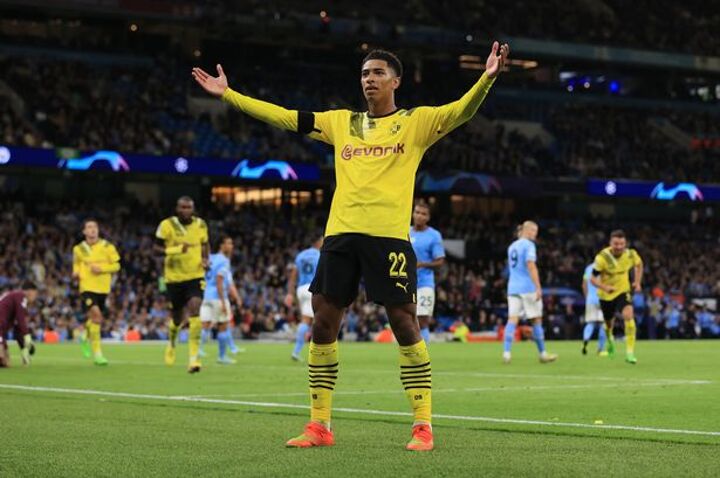 That's not because De Bruyne was bad per se - although he has performed below his usual high levels in recent matches - but rather for large parts of the match City were poor and Dortmund were excellent. A big factor in the German side's display was Jude Bellingham; the teenage England midfielder was superb, something he has made a habit of when coming up against City.

The 19-year-old scored Dortmund's goal early in the second half, but that only tells half the story of his performance at the Etihad Stadium. His tenacity, dynamism and fearlessness were on display for all to see, while the stats - four passes into the final third, four ball recoveries and three duels won - show he can do pretty much everything a midfielder needs to.

Pep Guardiola certainly appreciated the brilliance of Bellingham's performance, singling him out for praise during his post-match press conference.

"I was impressed three seasons ago when he [Bellingham] was 17, he is able to defensively follow Gundogan or Kevin [de Bruyne] in the pockets, in transition he is fast.

"He is an exceptional player. I think everyone knows it, not just because the manager of City tells you. Everybody knows it."

While City's main focus in this summer's transfer market was in attack - they won the race to sign Erling Haaland - and in defence - they brought in Manuel Akanji and Sergio Gomez - they expected to invest in the midfield next summer. With Ilkay Gundogan's current contract set to expire at the end of the season and De Bruyne not getting any younger, Bellingham could be the ideal signing. Akanji certainly seemed to think a move for his former teammate could be a possibility.

"He’s a great player," Akanji said. "He’s 19. He made a big step from first to second year. He keeps working hard. I think next year we're going to see a big move out of him."